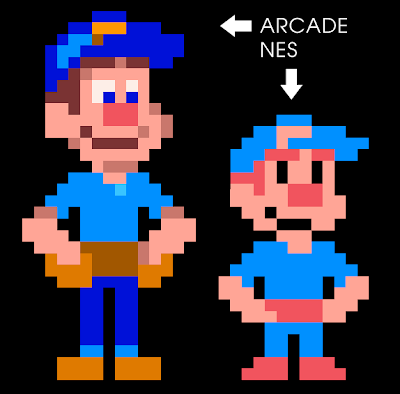 Here's a preview of the new sprite I did up for the fake NES cartridge I’m making of Fix-It Felix Jr.


The reason I didn’t just use the sprite that Disney made (on the left) is because you have to take into account the capabilities of the NES—only three colors can be used in a sprite, so it was fun to consolidate Felix’s colors while still making him look like Felix. I got a lot of comments about this sprite on Tumblr and elsewhere about whether the black in Felix's eyes and mouth counted as a fourth color. My intention here is for it to be a "background" transparent color. Obviously, this isn't an ideal solution as it would show the building behind him through his face, but I cite other Famicom games of the time as precedent for this unfortunate workaround! Specifically the lovely Tōkaidō Gojūsan-tsugi by Sunsoft.

As for the size difference, Arcade style Felix is 16x32 pixels. While this would be doable in an NES game, to work with their limited cartridge size it wasn’t uncommon for developers to shrink down the proportions of the character sprite. A top-of-my-head example would be Space Harrier, to wit:

NES games use sprites composed of 8x8 pixel tiles, which is what I tried to go for. Let’s just fudge it by a pixel or so and say NES style Felix is 16x24 pixels here. Figuring out these kind of graphical cutbacks is way interesting to me!
Posted by Ribbon Black at 1:05 AM
Email ThisBlogThis!Share to TwitterShare to FacebookShare to Pinterest
tagged with: art, comparison, disney, fix it felix, NES, nintendo, pixel, space harrier, wreck it ralph
Newer Post Older Post Home