Released as a budget title in 1990, Minna no Balloon Fight (Everyone's Balloon Fight) was a sort of four player battle royal version of the 1983 original. As you might have guessed, it is a special edition of the game that supports four simultaneous players. To take full advantage of this you would need something like Hori's "4 Players Adaptor" (scroll down a bit) or a modified NES Four Score. There is no single player normal mode in this one, although Balloon Trip supports one to two players. 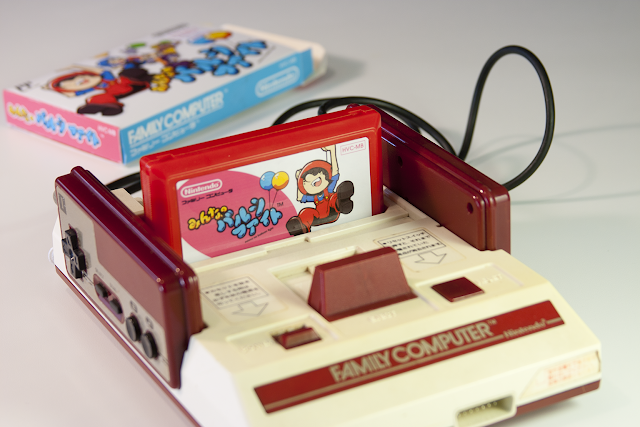 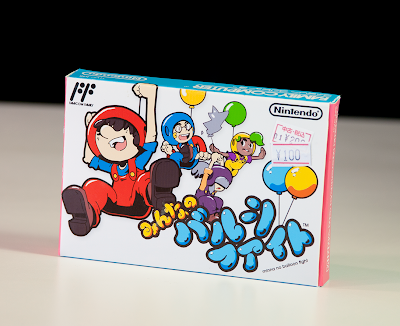 The characters, while still low in detail, are a bit larger as well. You would think that larger characters would be a bad idea in a game built around four people sharing the same screen,  but Nintendo took a page from VS Balloon Fight and added vertical scrolling to the playing field! This is something I always missed in the NES version, it would have added so much to the gameplay.* (see end of article for more boring talk about this)

In Battle Mode (2-4 players) the playing field spans two screens stacked vertically. In Balloon Trip Mode the screen may move either vertically, horizontally or diagonally. This makes Balloon Trip in Minna no Balloon Fight quite a bit trickier. 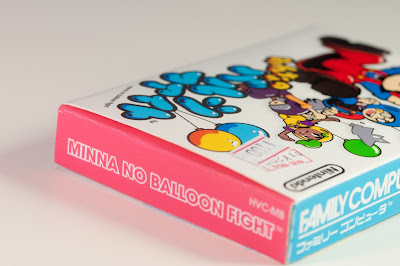 Unfortunately this copy doesn't include a manual, so there's no information on the playable characters shown on the box art. The fact that they were given specific looks and personalities (even if the in-game graphics are almost identical) was an interesting touch. Color-coding the players by balloon color makes it easy to see what's going on even when things get hectic. 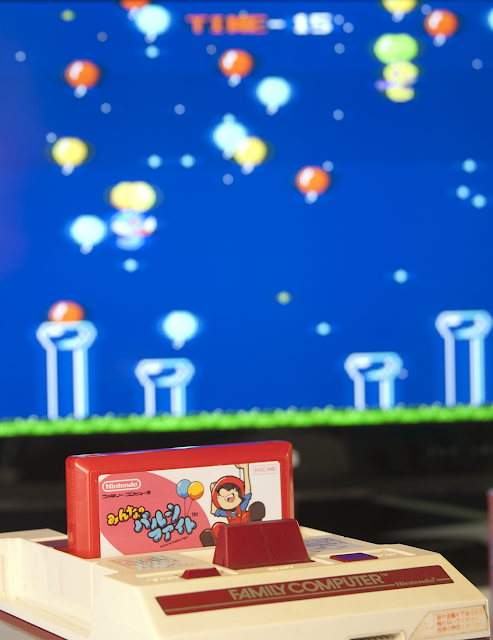 You can see the bonus stage in the background there (don't be like me and use widescreen TVs to play Famicom games). Compared to the original Balloon Fight bonus stage it's a colorful brawl and you can get some pretty crazy points here (popping your friend's balloons to take them out of the game for a few seconds is still the best tactic here). The game was a fairly bare-bones affair in the days of blockbusters like Super Mario Bros. 3, but that's really the point--a throwback to/celebration of the Famicom's arcade style roots. Pretty topical, considering the attention Balloon Fight has been getting from Nintendo in the last year.

So there you go--Minna no Balloon Fight. It's fake. Thanks for looking! You'll be able to find more photos if you're interested on my Tumblr.

*Incidentally, the reason vertical scrolling was removed from the NES version of Balloon Fight was because the NROM pcb Nintendo used in the earliest days of the Famicom could support only vertical or horizontal "mirroring" (mirroring is beyond the scope of this little writeup so let's just call it "scrolling"). So if we had gotten vertically scrolling stages in the NES version, we wouldn't have had the side scrolling Balloon Trip mode, and that would have been unacceptable. I'm not very well versed in NES development so I might be wrong here and Nintendo had other reasons for omitting the second screen, but that's my only guess.
Posted by Ribbon Black at 2:14 AM
Email ThisBlogThis!Share to TwitterShare to FacebookShare to Pinterest
tagged with: balloon fight, fake game, famicom, hal laboratory, minna no balloon fight, nintendo, package design, みんなのバルーンファイト
Newer Post Older Post Home