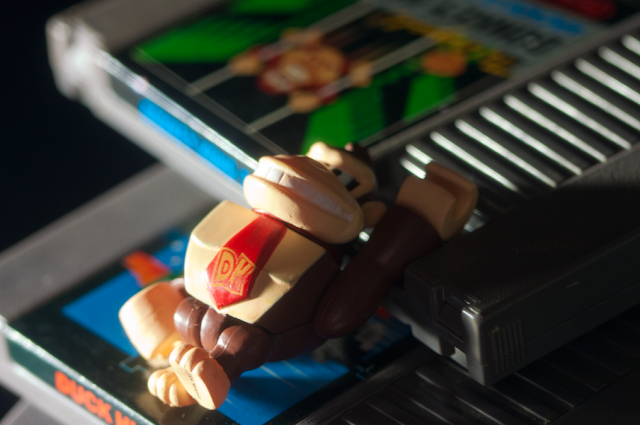 Here's a not so amusing anecdote about Donkey Kong 3.

When I was a kid, probably about eight or nine years old, my mom took me and my brother to the video store where my love of the NES really began--we rented a movie or video game (usually a video game) from there almost every day. If I had back all the money we spent renting games I could probably be a majority shareholder at Nintendo today). One day, years after the early era of the NES's "black box" games, I happened upon the box for Donkey Kong 3.


You know the one. Even though I was at the point in my childhood where these old games were considered "mondo lame" or whatever I said as a kid, I was really stricken by the DK3's design sense; with its large, chunky pixels that more than anything say "this is a Video Game" to me.

So I grabbed the box to show to my brother, exclaiming "Look, this one has GRAPHICS"

My brother's response to my dumb statement was so venemous I was traumatized for the rest of the day: "ALL games have graphics, stupid."

I felt like an asshole. And that's the most memorable thing about Donkey Kong 3 for me.