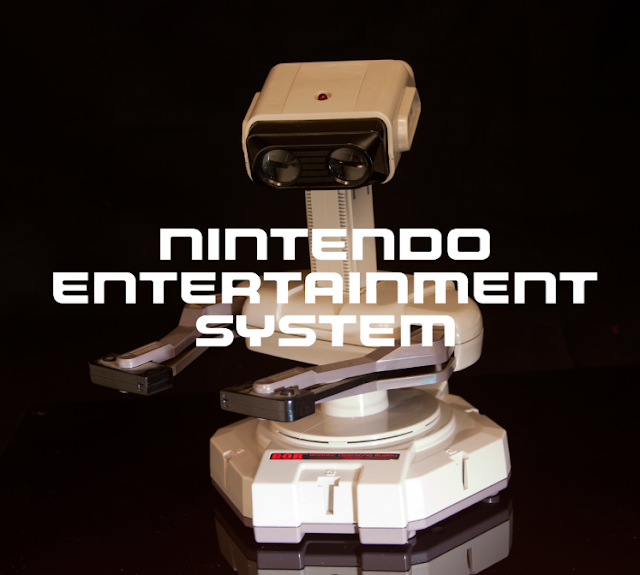 The Robotic Operating Buddy was a clunky Short Circuit looking piece of ass. At worst it was a failed gimmick--two games were made for the device (Stack-Up/Robot Block and Gyromite/Robot Gyro), and the robot's purpose--to very slowly press buttons on the 2P controller--was wholly negated by having a second human help you instead. Maybe Nintendo was catering to the patient, lonely child market.

Not my video--view this champion in action (skip to 1:20 for gameplay).

Many however believe that ROB was a savvy plan on Nintendo's part to entice consumers into taking another chance on video games after the crash of 1983. ROB wasn't part of their long term plan, just a way to convince parents that the NES was an "Entertainment System", not just a video game ,a term that had apparently become a bad word by that point. Once people got a look at the true stars of the console (Super Mario Bros. also launched with the NES in North America) ROB could be quietly let go, only to realize that once Nintendo has conceived of you, you will never truly rest.


Anyway, I got this guy at a thrift store for five bucks. Unfortunately the main unit is all that was included. I wanted to take a photo of him as I see him, on my toy shelf, surrounded by others, yet alone in his own dark thoughts. He prefers it this way.
Posted by Ribbon Black at 7:19 AM
Email ThisBlogThis!Share to TwitterShare to FacebookShare to Pinterest
tagged with: dignified photographs, famicom, i love video games, nintendo, peripheral, rob, robotic operating buddy

Blade Buster is a BRILLIANT homebrew Famicom/NES game from HLC Project. They wrung every drop of graphical performance out of the ancient console for a shootemup experience that's as smooth and fast as anything you'll see on a 16-bit console. Along with the legendary Recca and Crisis Force I rank Blade Buster as one of the three greatest shmup triumphs on the system.


You may notice that Blade Buster recreates the Stage 1 theme from Super Star Soldier. The level design is also highly reminiscent of Hudson's Soldier series, though as far as I know the layout is unique. It doesn't have the same length as Recca and Crisis Force but it isn't intended to--Blade Buster is a lovingly created ode to the days of Hudson's Summer Caravan competitions, in which children were expected to master that year's selected game and outperform their opponents in 2-minute and 5-minute score challenges (Recca was actually part of Naxat Soft's "Summer Carnival" competition and had the same short caravan style challenges, but also included a full-length game of its own). Later years saw Bomberman and even sports game challenges from Hudson, but in the late 80s/early 90s shooting games ruled the damn world. 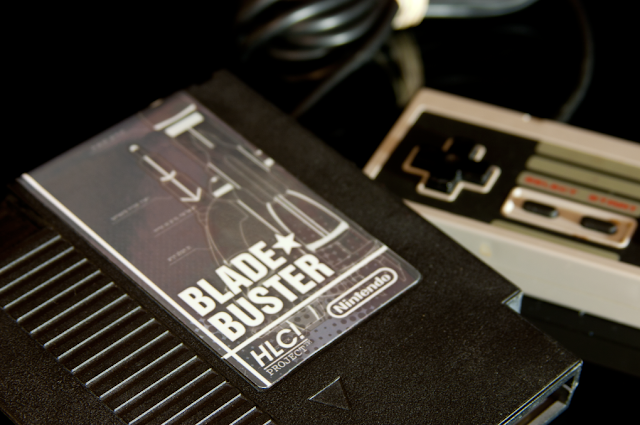 For the label design, I decided on a technical looking diagram of the ship you pilot in-game, based off the actual graphics. It's okay. The way I really wanted to make it pop was by repainting the cartridge. You wouldn't think it would have worked but it did! I used Krylon Fusion paint made specifically for plastics, and put on several light layers until it was solid black. Keeping the coats thin makes it look like the cart was always black and not just covered in paint. Very durable too, I haven't scuffed it yet.

Unfortunately! I later translated the website for HLC Project and saw that the developer was understandably particular about way the logo was done when making custom labels and repro carts. Obviously my minimal white text logo is inaccurate to the in-game logo, and I'm kind of bummed. Not bummed enough to do a new logo, but maybe someday. 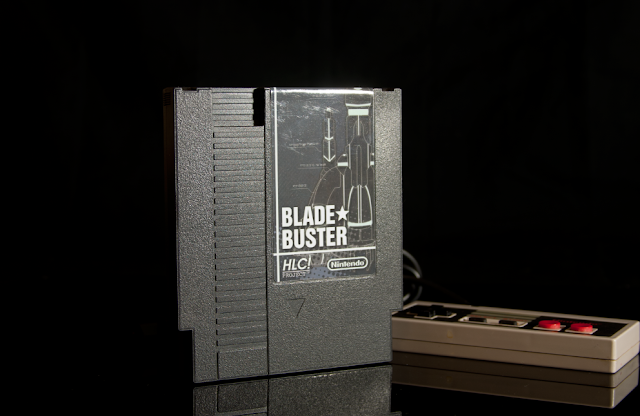 It's here! My Famicase Exhibition 2013 finally came online tonight and it's a thrill to see everyone's new designs (and mine alongside them). Why not exploit everyone's hard work and get a blog post out of my favorite designs from this year's show? 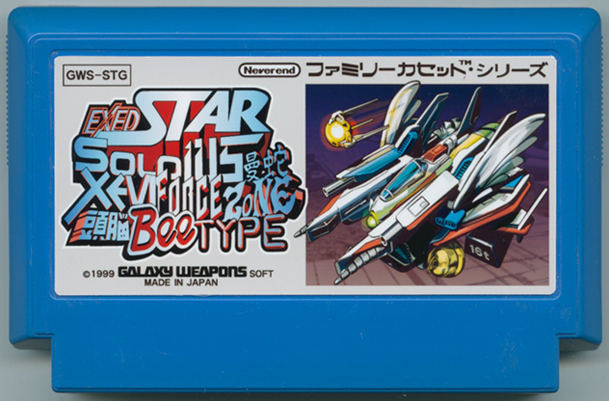 Likely to be one of the favorite entries, I bet, especially among shootemup fans. This remix of classic titles really benefits from the extra mile the artist went in mashing ten different franchise logos together (in their original respective typefaces)...somehow it works for me. The thing that really flattens my balls is the player's ship--ten different vehicles thrown in the blender and poured into a glass of super dimensional death machine. I'm not well versed on shootemup vehicles (I could probably tell you the difference between the R-9 Arrowhead, the Vic Viper and the Silver Hawk at least) but I can recognize the feather wings and 16t bomb from Fantasy Zone, the Force from R-type hovering above,  and what I believe are part of the wings from Vic Viper. Total genius.

The game's product serial on the top left is a great touch too: STG being the abbreviation for Shooting Game. Can you identify the other shooter references in the ship? 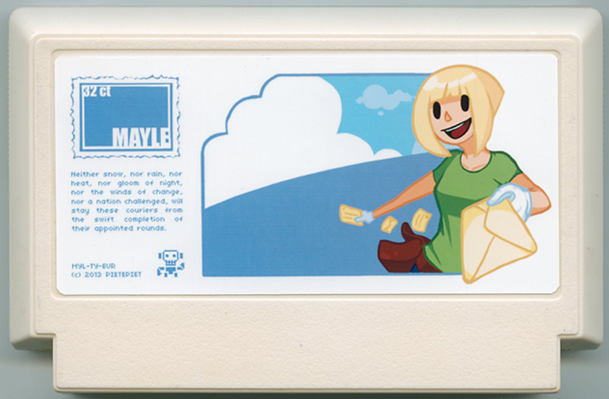 Simple, sharp and plays to my love of blue and white. The logo made from a postage stamp is unexpected and works great with the tiny synopsis text oriented below it. Overall a good use of grid in the design! I think the game's concept is really cute too and would be fun to play.

More behind the cut.

Elsewhere: Labyrinth of Cemetery (Ribbon Black, 2013):
"This is an eerie place known only as Elsewhere. Can you help Muscadine escape the Great Graveyard or will she become its newest resident? Six levels of platforming and exploration."
I had a blast making this, and it was good to use an old character I used to draw years ago (also seen in my SNES cart for March of the Dead). The label was a decent bit of work to do but the real challenge was the mockup screenshots. After I made one, I thought "why not make it move too?". Working with the restraints of the NES hardware as always is a fun, extremely time consuming puzzle.

Long time no see guys. Here's a cart I originally made for the Famicase exhibition before I decided to go with something else. The Famicase website still isn't up yet as of this writing, so I'll wait to post the one I submitted to them, but in the meantime here are some of my other ideas! 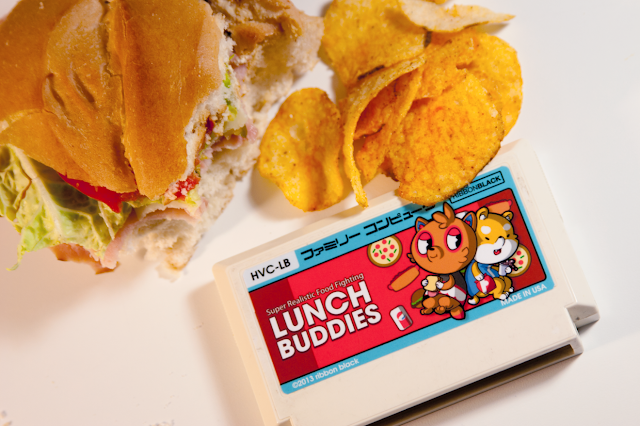 Lunch Buddies is based on the webcomic (some cartoon grossness if you're of frail disposition) of the same name, about a dog (Ghost) and a fox (Gish) and...the things they do.

Compete against the CPU or with a friend to get the most food in this action free-for-all! Powerups like Ketchup allow your character to eat faster and leave puddles for your opponent to slip in. Between meal bonus stages earn you more points for washing dishes faster than the other player.


The game is terrible and best described as a cross between Micro Machines and World Class Track Meet. The character designs are cute though. 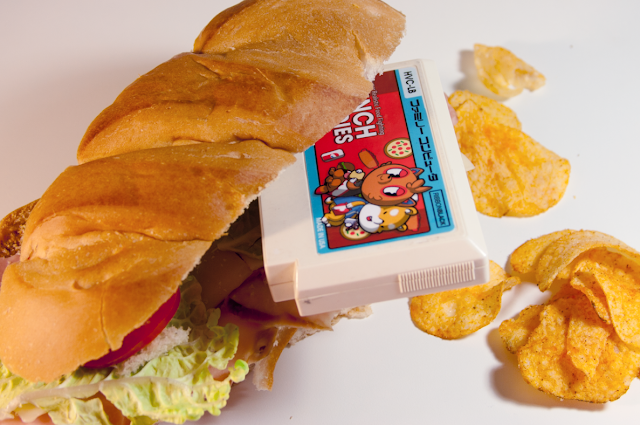 More to come later! If you want more photos of Lunch Buddies I posted some here.