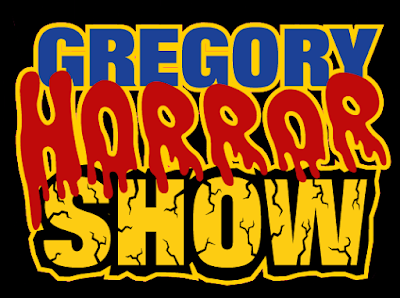 Oh man, where to begin with this thing? Gregory Horror Show was originally a collection of CGI shorts (very short--each episode is only two and a half minutes long) that aired for 88 episodes on Japan's TV Asahi network. 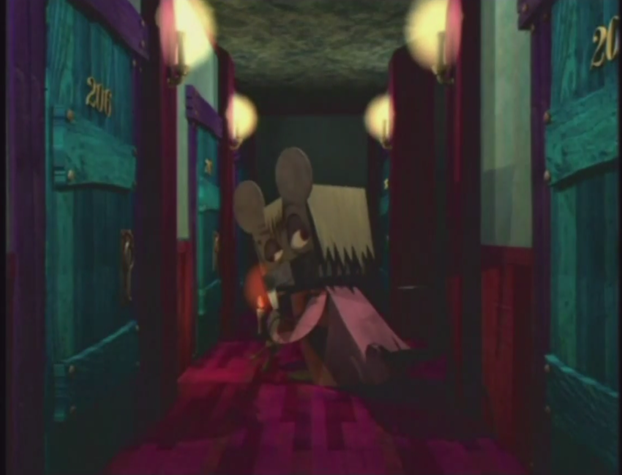 The first two seasons of the show involve a person who finds themselves lost in the middle of the night, coming upon a decrepit hotel run by a deranged mouse named Gregory. The hotel appears to exist outside of normal time and space, acting as a sort of purgatory that the guest cannot escape. As you can probably tell by the art style, Gregory Horror Show can be categorized as "light horror". There are lots of creepy and dreamlike situations offset by such completely goofy characters as Catherine the blood-obsessed lizard nurse, an anthropomorphic set of scales named Judgement Boy, and a zombie creature simply named Dead Body. You can watch all of the episodes on YouTube so check them out and see what you think! 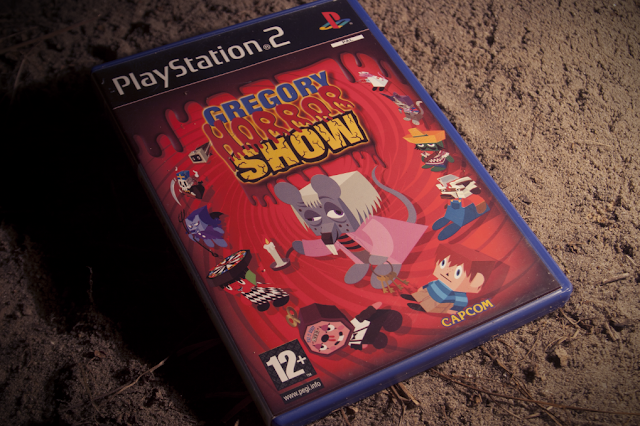 In 2003, a GHS video game (of all things) was released by Capcom (of all companies) for the Playstation 2 in Japan and Europe. The story is similar to the first two seasons of the TV series; players choose a male or female guest and try to escape Gregory House while interacting with the sinister proprietor and other weird characters. Thanks to the help of Neko Zombie and Death himself, the player learns that by collecting the souls of others one could somehow find their way back home.

Gameplay wise GHS is unique, combining RPG and puzzle elements with stealth based Survival Horror. By observing the guests of Gregory House through keyholes and by talking to others, players must learn their weakness and exploit it to make the guests' souls appear so that they can be collected. After that watch out--the guest will try to catch the player if they see them again and subject them to a "Horror Show" that drains their mental health gauge. Losing all of their mental health due to Horror Shows or simply not maintaining it with sleep and item use (it drains automatically over time) will end the game with the player going mad and becoming a lost soul themself. If it weren't for the game's sense of humor and huge amount of character it would be pretty damn dark, though I still think it has its moments (the soundtrack in particular is incongruously creepy compared to the character designs). 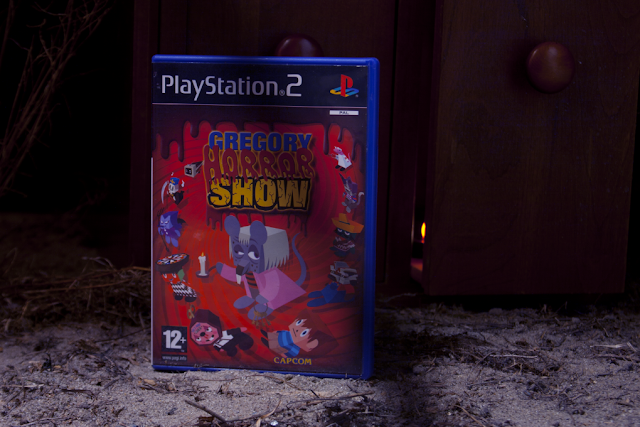 This game is not the easiest to get hold of. If you know the language you could go for the Japanese version, but a used copy goes for over a hundred dollars. If you have a modified or European PS2, however, it can be gotten quite a bit cheaper! I found mine on ebay last year for $20, though I think the price has gone up since then. Even if you live in the States the boot screen for the game allows you to change the frequency for NTSC TV sets, so there's no problem there. All things considered, your best bet would be emulation. 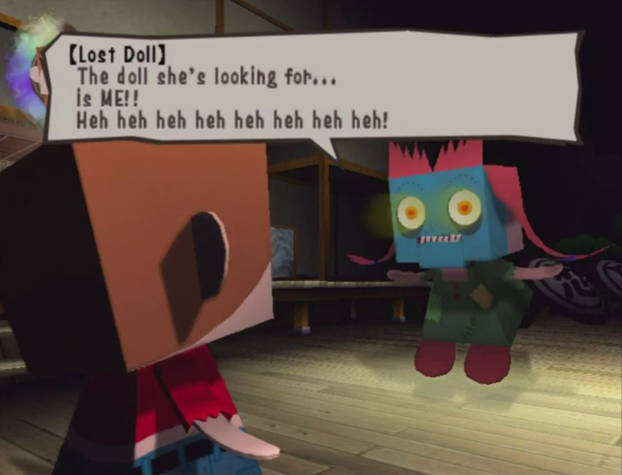 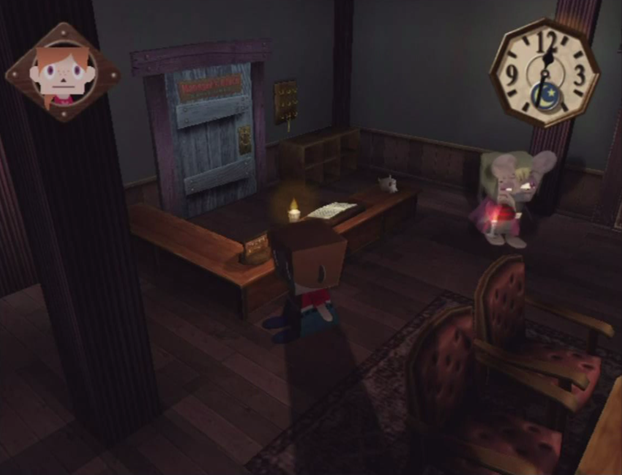 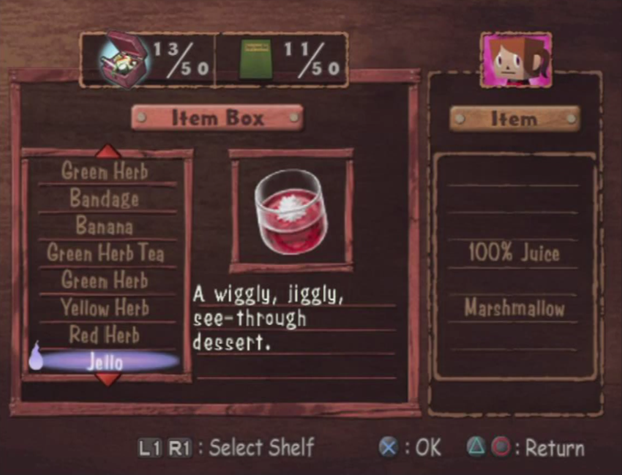 Writing is not my forte, so I'm unfortunately selling Gregory Horror Show short for you guys. If you can get it: get it! Or at least watch a Let's Play. It's a unique experience that deserves a larger following. 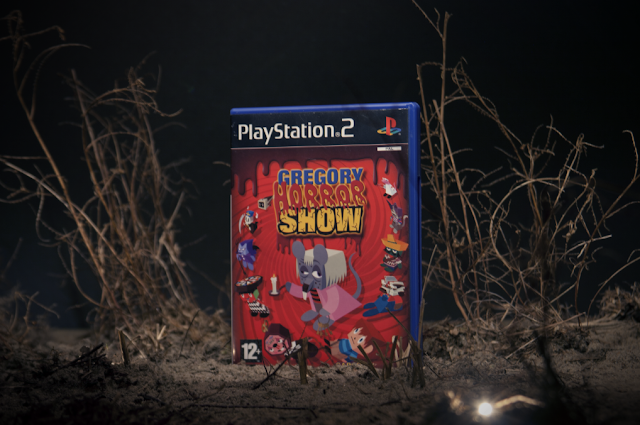 Posted by Ribbon Black at 4:23 AM
Email ThisBlogThis!Share to TwitterShare to FacebookShare to Pinterest
tagged with: capcom, gregory horror show, halloween, horror, ps2

Good luck finding a game that screams HALLOWEEN more than the legendary Splatterhouse. First released in 1988 in arcades, the original horror platformer saw two sequels on the Sega Genesis and then lay dormant for 17 years until it was brought back in 2010 as a 3D God of War style beat-em-up. 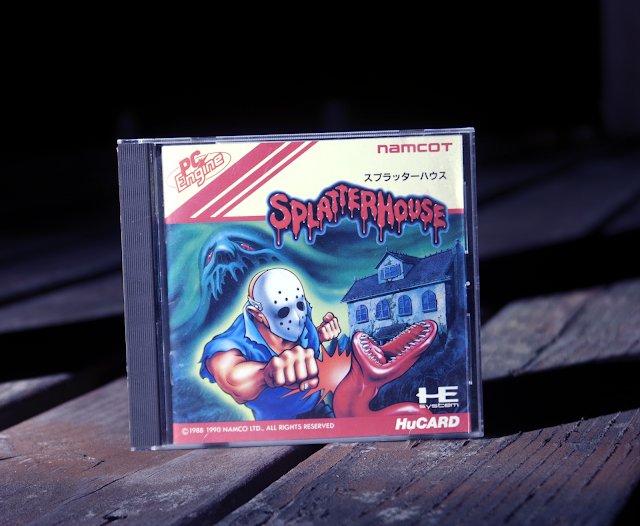 One look at the cover art tells you that this is not a game that leans too hard on its plot. In fact, the cover really tells you all you need to know about it: there's a house,  and splattering happens. Like most arcade style games of the past Splatterhouse is a fairly brainless, pattern-based affair that is carried (and carried well!) by its presentation. I've got a few more pictures to post though, so let's get into the plot anyway.


So what's the game about? Parapsychology student Rick Taylor and his girlfriend Jennifer get caught in a thunderstorm one night and take refuge in a sprawling mansion deep in the forest. They're attacked by creatures and Jennifer is taken away--Rick blacks out and awakens to find that he is wearing the TERROR MASK, a totally not copyright-infringing piece of headgear that gives him the unearthly strength he needs to splatter his way through the house and rescue Jennifer! Beginning with the second game the Mask actually begins talking to Rick and becomes a character in its own right.


The real highlights of Splatterhouse are the boss battles, each one distinct and requiring a different approach. Take the Boreworms in Stage 1: you land in a room full of carnivorous, bloated creatures that leap from piles of gore strewn about the floor. Take care of them quickly or you'll get overwhelmed. One of the more creative ones is pictured above: a room possessed by a poltergeist comes to life and starts throwing all its furniture at the player! Once you think you've beaten it there's one more surprise that killed me the first time I played. 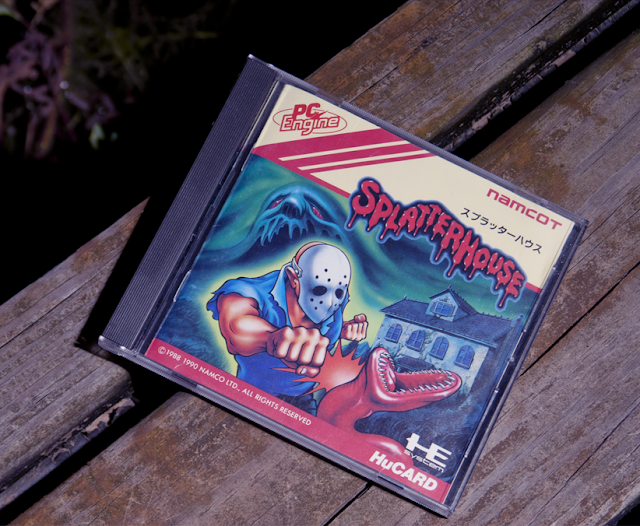 Splatterhouse wears its horror movie love on its sleeve--the main character looks like Jason Voorhees, the titular Splatterhouse is called West Mansion (likely named after Dr. Herbert West from Reanimator), one boss has had his hands replaced with chainsaws...it's just terrific. The soundtrack is also full of wonderful 80's style horror synthesizer music:

Give Splatterhouse a try this Halloween! It's short and kind of difficult and deserves an 11-out-of-10 on the Halloween-o-Meter.

Recommended for: anyone who likes horror and classic arcade games, people who agree that Splatterhouse is the most badass name given to any video game ever
Posted by Ribbon Black at 3:04 PM
Email ThisBlogThis!Share to TwitterShare to FacebookShare to Pinterest
tagged with: halloween, horror, namco, namcot, pc engine, splatterhouse, turbografx-16

Thanks to the long shadow Dark Souls has cast on the video gaming landscape, From Software needs no introduction. Other than the hardcore action RPGs they're currently famous for, you may also know them for their (very) long running Armored Core franchise; students of retro gaming have probably also discovered the difficult and nearly inscrutable King's Field, AKA From's "proto Dark Souls" series.

I'm willing to bet, though, that a majority of people haven't touched on From Soft's other franchise, a series of quiet and moody first-person adventure games known as Echo Night. Rather than throwing you ass-first into a hostile and brutally difficult environment and expecting you to hack your way through, Echo Night takes the player across time and space to lay the souls of the dead to rest by entering their memories (or echoes) to reunite them with lost loved ones, find an item that was special to them, etc. It all sounds very sweet if you don't consider that some of those souls have been driven mad and want you dead--only by escaping or avoiding them until you find out and give them what they need can you progress through the game. 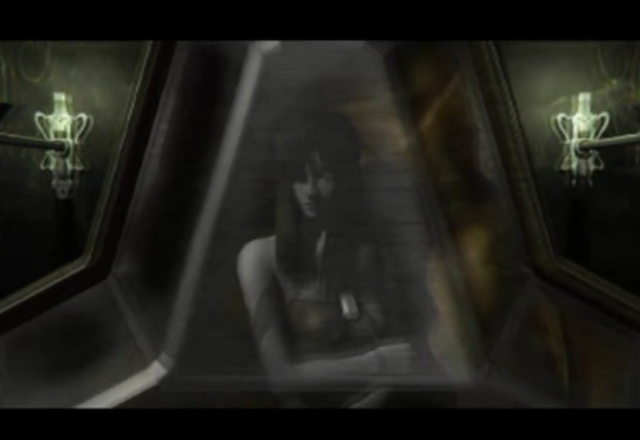 That's a basic primer of the Echo Night franchise that should give you the gist of how each game works, though the mechanics and settings of each game will vary. For my first October Horror Games post (about time) we'll have a look at the only game in the series that never officially reached the West--Echo Night 2! 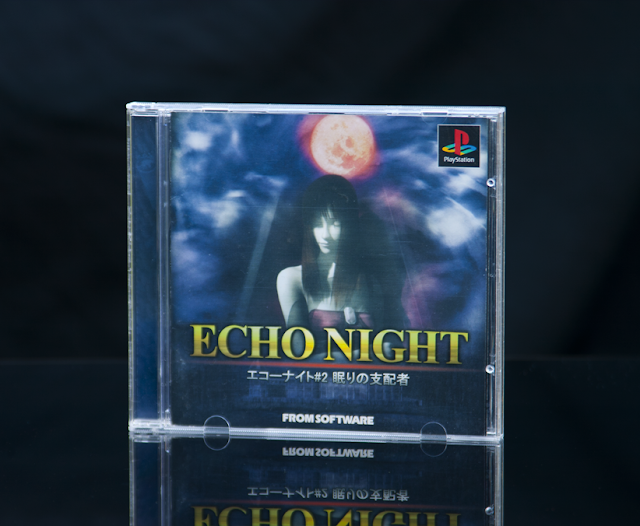 The subtitle of Echo Night 2 is Nemuri no Shihaisha, which translates to "The Ruler of Sleep". I find that title much more appropriate than the one given by the recent fan translation, "The Lord of Nightmares". However, given that Tom and Gemini have made it possible for everyone to finally experience the game I'll happily overlook the creative license.

So what is it about? Players assume the role of Richard Osmond, a man looking for his missing girlfriend Rebecca. She was last seen at a certain library; upon arriving at the library he finds a book that she had been investigating and blacks out, finding himself in a sprawling manor. Most of the lights are out, and nearly every person he encounters is a ghost, appearing as black shadows of their former selves. Richard soon finds a woman sleeping in a glass casket suspended from the wall--a woman who looks exactly like the missing Rebecca. Who is she and why is she trapped? What caused the deaths of nearly everyone in the mansion? I have no idea because I haven't beaten it yet! 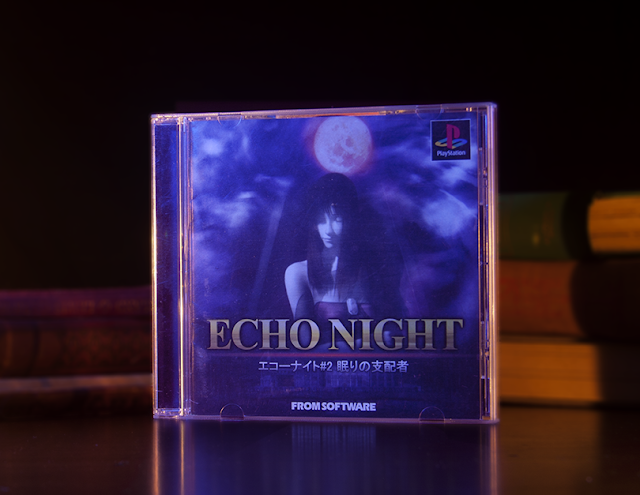 As mentioned before, there is no combat to speak of in Echo Night 2. Gameplay revolves around exploring the mansion and surrounding areas, including occasional trips into the past lives of the house's dead inhabitants. Though some will chase the player throughout the mansion and attempt to kill them, most spirits can be spoken to and will either directly ask you for help or hint that they need something, leaving it to the player to puzzle out what it will take to put them to rest. The entire game has an odd, somewhat dream like quality to it that From Software expertly achieved back in the day. Don't expect stunning graphic or fluid controls! If you know the developer's pre-Souls output you'll know what to expect, but everyone else will have a bit of an adjustment period if they want to tackle Echo Night 2. And you should! 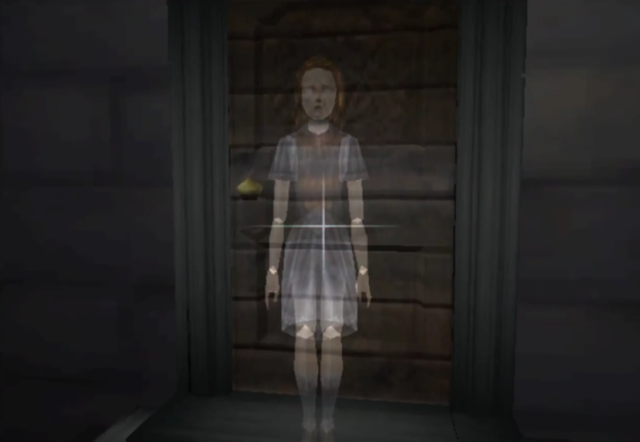 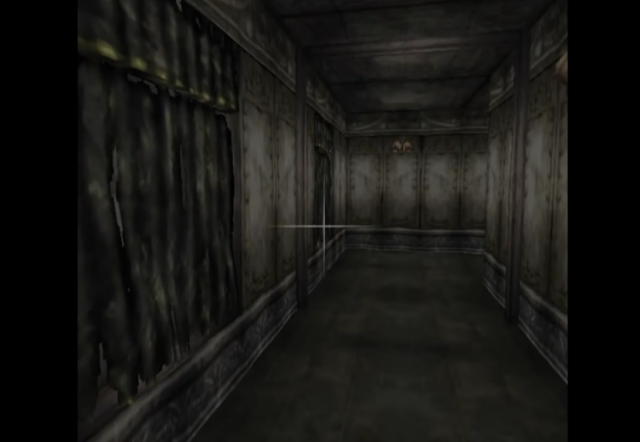 Recommended for: From Software fans, people looking for a Halloween game that is somewhat clunky, off-kilter and creepy
Posted by Ribbon Black at 8:20 AM
Email ThisBlogThis!Share to TwitterShare to FacebookShare to Pinterest
tagged with: echo night, from software, halloween, horror, playstation, ps1

Oh, hello! Been a while. I'm still doing things, mostly on Tumblr. After a year though I thought I should post a few things I've been up to lately.

Just as a way to ease myself back into blogging again I wanted to dump a few Splatoon related drawings I did recently. If you see a squid named Hashbrown in-game that's me! 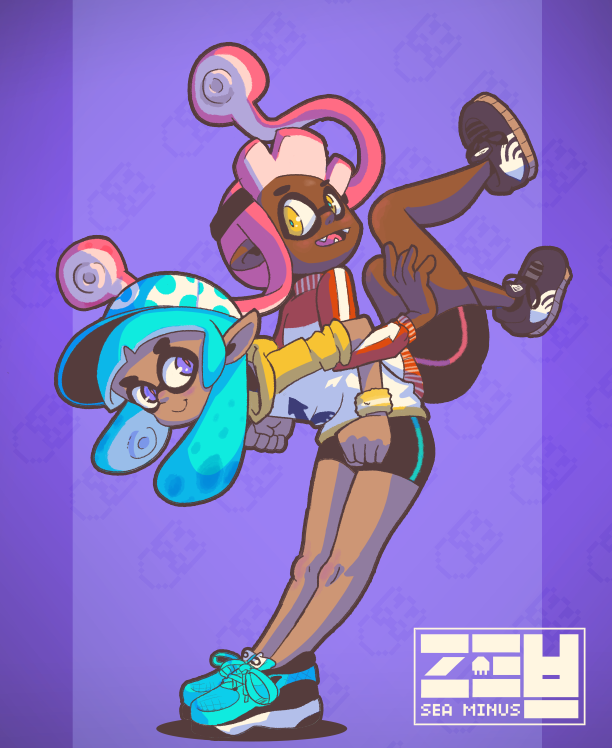 A little comic I made about how Splatoon's 2.0 update increased the knockback Bubbler shields take when hit by enemy fire--I imagined that an unstoppable attack like the Killer Wail would send you into outer space, haha.


Halloween is on the way, so there'll be more soon.