Happy New Year from Jay and Julian (Animal Crossing New Leaf)! I haven't been able to do anything productive since my Mr. Splash post, but I wanted to do up something quick before the year ends.

This year was okay. I made some cool blogger friends, including a few people I had been following/reading for a long time! On the art front I didn't accomplish anything approaching the success of my Adventure Time famicom cartridge project, but that's okay--I had a lot of fun and success with comics, particularly "This Week In Town", my Animal Crossing series. This year I hope to make a lot more comics, organize a zine, get way better at illustration and pixel art, and lose weight/get better at running. I'll start with cleaning the bathroom...later.

Posted by Ribbon Black at 9:36 PM
Email ThisBlogThis!Share to TwitterShare to FacebookShare to Pinterest 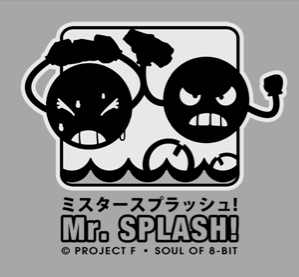 Mr. Splash!Developed by Hiroshi Inukai aka Polygon (2007, Famicom)
I finally made a reproduction cart of the elusive homebrew game Mr. Splash! I love it. Rather than using the official art (which I couldn't find a good copy of) I designed my own label, going for a Game and Watch aesthetic. What do you think? 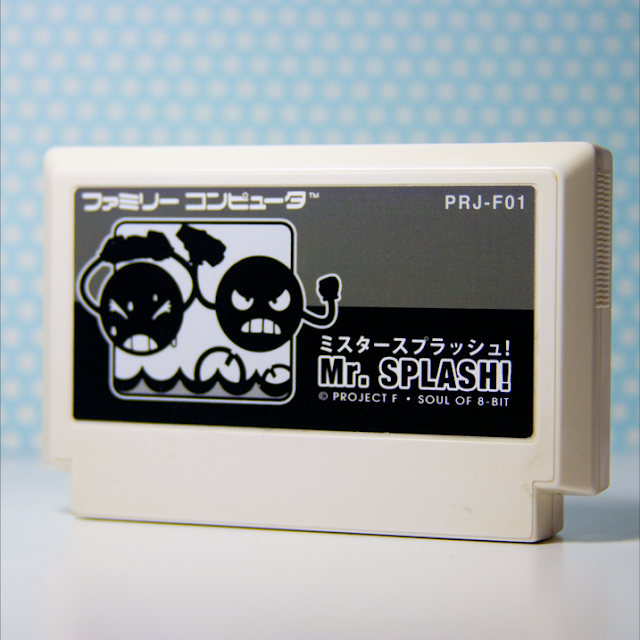 Mr. Splash is a 2-player only competition game created for a project called Game Generation X - Soul of 8-bit. However, the developer Polygon didn't seem to want the game to be widespread--those who preordered the Game Generation X DVD box set got the materials to solder their own Mr. Splash Famicom cart, and these were apparently limited to 101 pieces. 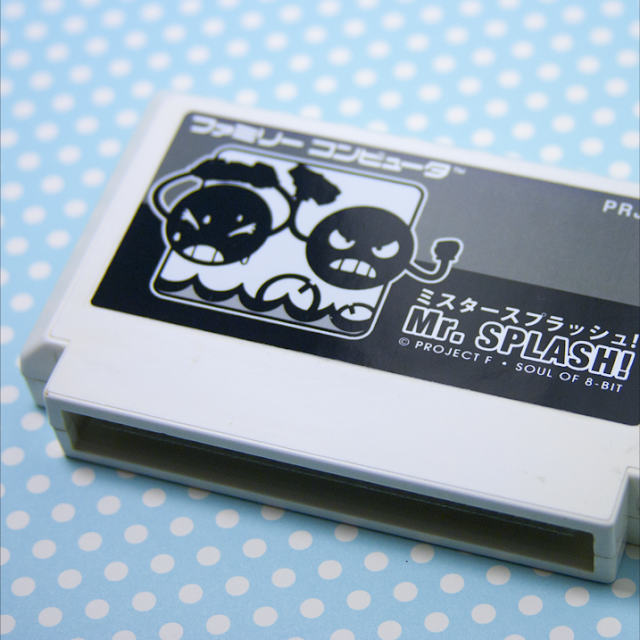 Some time later a run of 50 was produced for the NES in France, but a ROM of the game was impossible to find until 2011. Even now there don't seem to be a ton of them floating around but you can find it easily enough if you search.

So let's talk about the game! It's sort of like hockey, but in a swimming pool. Your Mr. Splash must pick up rocks that spawn along the sides of the arena and hurl them into the water. The waves you make with your rock will move the floating balls in the water toward your opponent's goal area.

What really impresses me about the game is the use of physics when it comes to how you move the floating balls. Chuck a rock right into the center of the ball and watch it go deep underwater and spring straight up; however, hit the ball off center and you can steer it toward the goal. Depending on how long you hold the throw button down, Mr. Splash will power up and throw it harder, altering the ball's trajectory in a variety of ways. 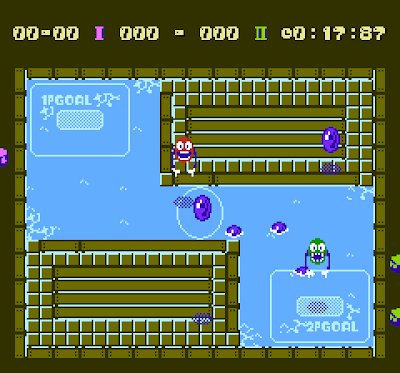 You don't have to hit the ball at all, though! Plunk your stone down near a ball and the motion of the water will nudge it instead of launching it. Nudging a ball into your opponent's goal will earn you one point while launching it into the proper area will net you 3 points. A long shot can get you up to 6 points! It's a simple game, but the amount of work put into the play mechanics is impeccable. Turn the number of onscreen balls up to 5 and enjoy the chaos!
There are also many versions of the game, apparently with edited arenas. The screenshots shown above are from the emulated "Columbia Version", though my cartridge is the vanilla Mr. Splash.
I got most of my info on the history of Mr. Splash from this article at RetroCollect. Give it a look if you wanna know more. 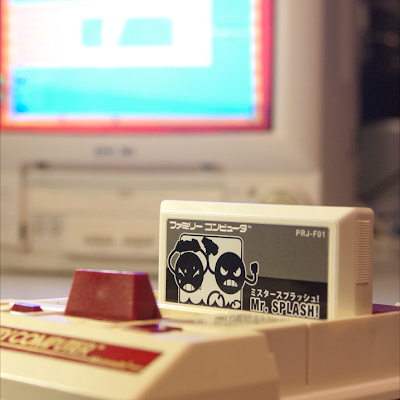 Has anyone played Mr. Splash yet? What did you think about this homebrew gem?
Posted by Ribbon Black at 6:32 AM
Email ThisBlogThis!Share to TwitterShare to FacebookShare to Pinterest
tagged with: custom label, famicom, game and watch, graphic design, mr. splash!, reproduction

I've finally made my own holiday cards 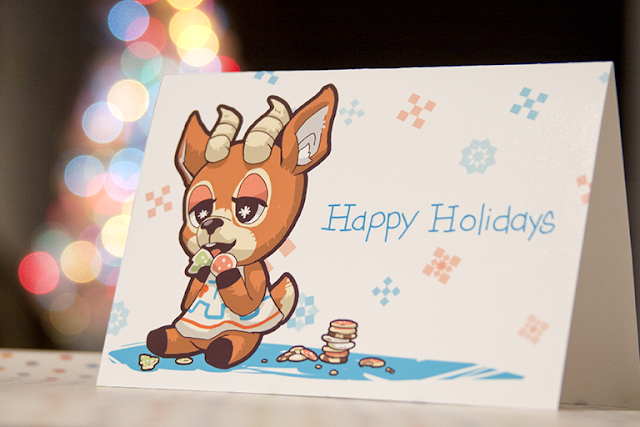 It's Beau from Animal Crossing: New Leaf! I've yet to get him in my own town, but he's one of my girlfriend's "lifers"; no moving out under any circumstances, haha. Kind of like how Jay was for me. And then the son of a bitch moved out behind my back. 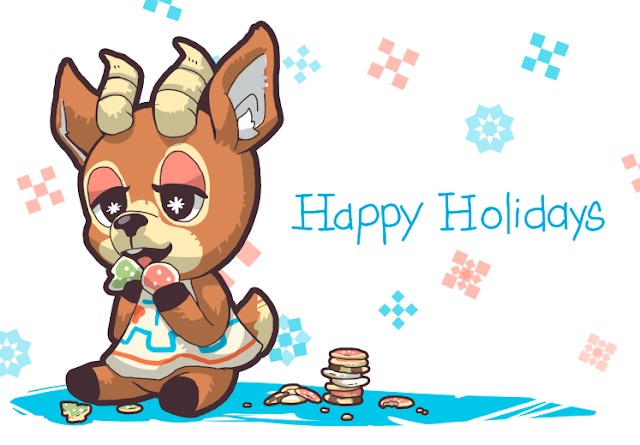 Now all I need are friends to send them to! If nothing else, it makes a cute fanart. Anyone else out there make their own cards? It would be a fun project for a bunch of artists to have an exchange.

If I had thought of it earlier, maybe I could've set something up on Tumblr...
Posted by Ribbon Black at 5:24 AM
Email ThisBlogThis!Share to TwitterShare to FacebookShare to Pinterest
tagged with: animal crossing, art, beau, christmas, fan art, new leaf

Just having some fun. I took a photo of the empty frame and overlaid the Mario sprites in photoshop to make a gif. It's too bad the camera didn't pick up the steam from the coffee mug!
Posted by Ribbon Black at 6:00 AM
Email ThisBlogThis!Share to TwitterShare to FacebookShare to Pinterest
tagged with: dignified photographs, mario 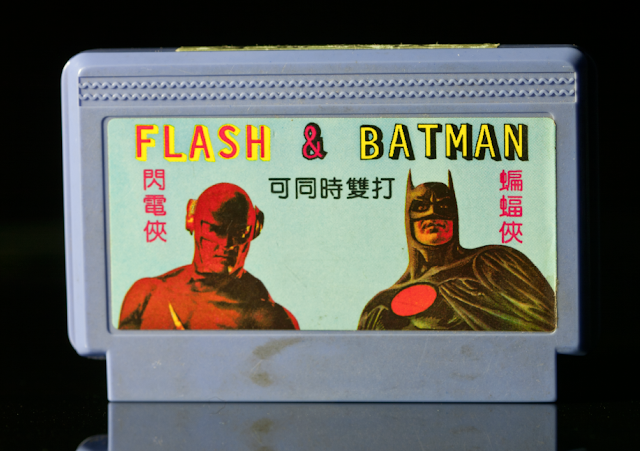 Well...Flash & Batman. I found this at the local flea market (and overpaid too; most single-game bootlegs are kind of value-less and worth only what you wanna pay for em) but decided it was finally time to get some pirate Famicom carts just for laughs. I love Batman's face on the label there--his "OH SHIT" look really inspires confidence. Flash on the other hand looks absolutely sinister. So, what were you thinking Flash & Batman would be? Were you expecting a rom hack of Monster In My Pocket? Neither was I. As you can see, these are emulator screenshots, so the cartridge unfortunately isn't some undiscovered bootleg gem. I decided to play as Flash (AKA Frankenstein's monster in the original game). 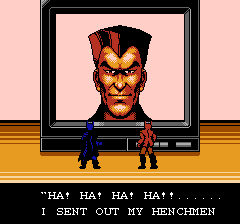 I'm actually surprised they changed the character sprites for the intro cutscene. It isn't explained where Batman & Flash got that giant TV though. 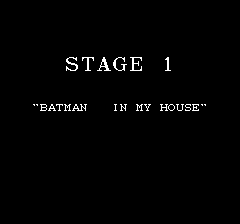 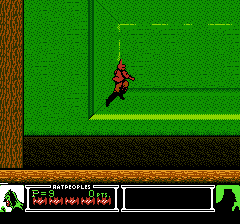 Posted by Ribbon Black at 4:06 AM
Email ThisBlogThis!Share to TwitterShare to FacebookShare to Pinterest
tagged with: bootleg, dignified photographs, rom hack

Just a dump of some animation/pixel art stuff you may have not seen if you don't follow my tumblr.