**Hey guys; as expected, I missed ANOTHER October Horror Games month! I've been busy lately, what with moving 1600 miles across the country to start a new job at a game studio in California. I do plan on finishing these though! Stay tuned.** 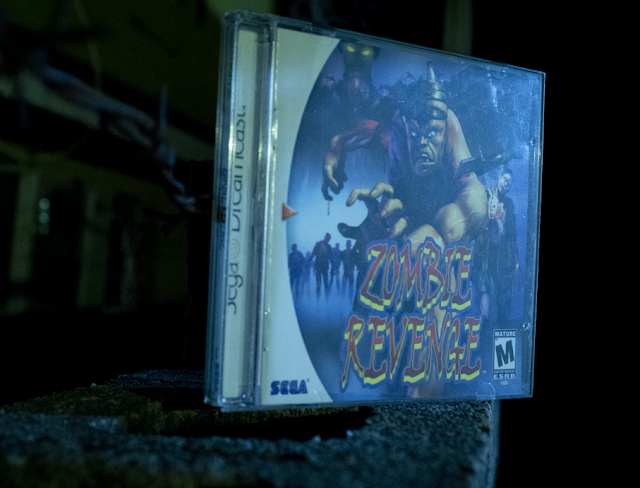 Known mostly its over the top horror atmosphere, location-specific enemy damage and absolutely ludicrous voice acting, HotD is one of the elder statesmen of the light-gun genre. Think of it as a good version of Crypt Killer (does anyone besides me think about Crypt Killer?). Most of the franchise plays it straight; move through a variety of locations on rails, clowning on zombies and mutants with a fun and satisfying selection of firearms. Every one of the light games absolutely rules.

However, once in a while Sega likes to mix it up and we'll get a strange spinoff title such as the The Typing of the Dead, The Pinball of the Dead, the odd minigame collection (featuring two zombies in love!) House of the Dead EX, and today's exhibit, 1999's Naomi/Dreamcast title Zombie Revenge.

Unfortunately, Zombie Revenge is the weakest spinoff of the franchise. The light-gun theme (and first-person viewpoint) is dropped in favor of a beat-em-up style of gameplay similar to Sega's own Dynamite Cop, released the previous year. Control the excellently named Stick Breitling (the standard man character), Linda Rotta (the standard woman character) or Rikiya Busujima (a ki wielding force of nature who resembles a 1970's Japanese crime movie archetype, specifically actor Yusaku Matsuda) and prevent the confusion in the city during a zombie outbreak.

Per the HotD Wiki, Zombie Revenge was originally titled Blood Bullet: The House of the Dead Side Story and Zombies Nightmare, two way cooler names.

Is it good?
Zombie Revenge is a sharp looking game, with detailed character models and decent looking environments (mainly grimy urban areas) and a few sick boss designs. There's even a stage in the latter part of the game where you revisit Curien mansion from HotD 1, complete with the classic stage 1 theme and the iconic run through the mansion courtyard!

There are lots of arcade style gimmicks, such as rescuing civilians and pulling the brakes on an out of control train while your partner holds off an endless wave of enemies. The presentation side is flashy, goofy and well done.

On the other hand, the gameplay leaves me cold. The combat feels stiff and repetitive; I don't feel that each character's arsenal is varied enough to really empower the player. Gunplay, which is actually a large part of the combat--it's still House of the Dead after all--is similarly unsatisfying. The visceral fun of blasting zombies to pieces from the mainline games does not translate at all in Zombie Revenge.

Speaking of not feeling empowered, the difficulty in this game is very uneven and in my (and many others) opinion is difficult in a cheap way. Come for the atmosphere, not the gameplay.

A full playthrough should run you around 45 minutes or so and boyoass do you feel every one of those minutes. Honestly if it were a little shorter and breezier I think the game would do well for it.


Is it scary?
Shit no; any other HotD game is scarier than this one, and there are no scary HotD games. This franchise has always been more of a B-movie experience than actual horror...rundown mansions, over the top violence, mad scientists, bad acting. On that front, Zombie Revenge does exactly what it set out to do. I suppose the time limit could be nerve-wracking if that sort of thing bothers you. It doesn't help that an alarm noise plays incessantly when it's time to move on and the announcer will straight up yell THERE'S NO TIME when the clock starts running low. 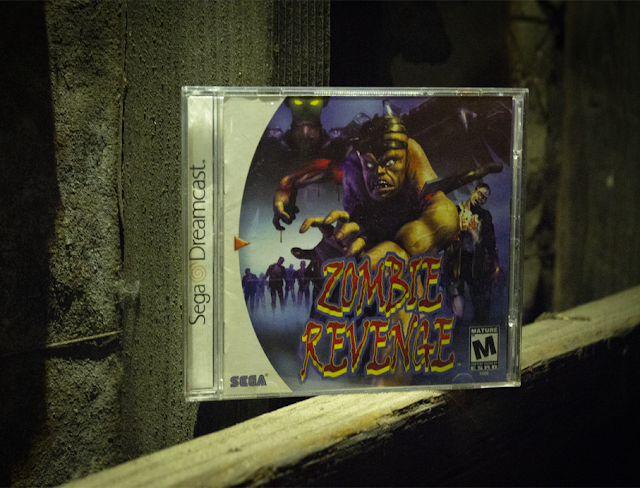 Should you buy it?
Welllll, that really depends on the person. I don't think it's an extremely good game, but it is a spectacle, and as of now you can find it on ebay for around $30 USD. For House of the Dead fans I say go for it! For everyone else, I would recommend Dynamite Cop if you want a DC beatemup.

Also, someone on the development team was a big Desperado fan if that helps influence your decision at all!
Posted by Ribbon Black at 3:26 AM
Email ThisBlogThis!Share to TwitterShare to FacebookShare to Pinterest
tagged with: dreamcast, halloween, horror, house of the dead, sega
Newer Posts Older Posts Home
Subscribe to: Posts (Atom)