About ten years ago I had the idea to do a siiiiick black and red paint job on my Dreamcast and it looked like complete dog shit--mostly because I had no patience, knew nothing about spraypainting and used flat finish colors with no topcoat. Lots of paint scratched off immediately, followed by years of scuffs and embarrassment every time I looked at it.

I still know nothing about painting but I'm a little more patient and I have some 1000 grit sandpaper to smooth out mistakes, so I decided to go with something less brutal but much prettier! 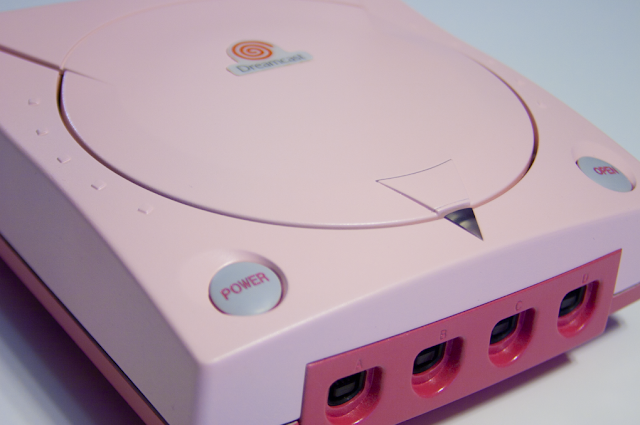 Getting decent photos as always, was a chore, but you get the idea here. Going with a two toned pink look instead of two different colors was a better approach, and the gloss finish gives it a candy coating, jewel-like look that I'm way into. 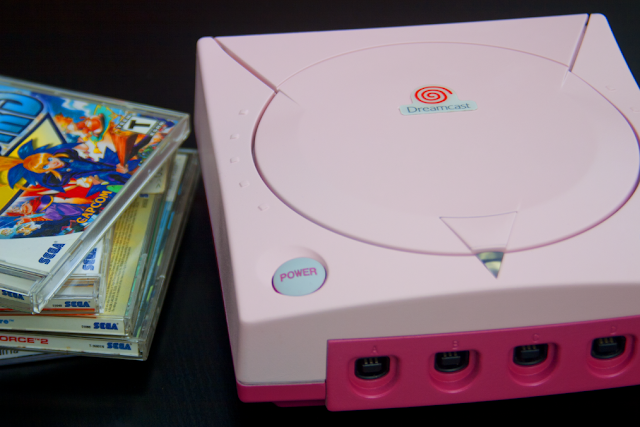 I painted the Power and Open buttons the darker pink, then lightly sanded the paint off the face of the buttons so only the etched words and barely visible edges of the buttons were colored. Ended up being a pretty nice effect! 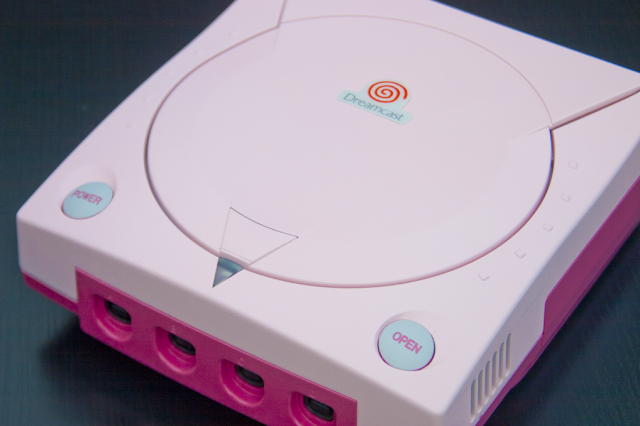 In the future I'd like to sand it smoother and put a glossy topcoat on the shell to really make it durable and bright. I'm bummed that there are still a lot of mistakes here but to the casual observer it looks pretty flawless, so I'm satisfied for now!
Posted by Ribbon Black at 3:29 PM
Email ThisBlogThis!Share to TwitterShare to FacebookShare to Pinterest
tagged with: dreamcast, i love video games, repainted, sega 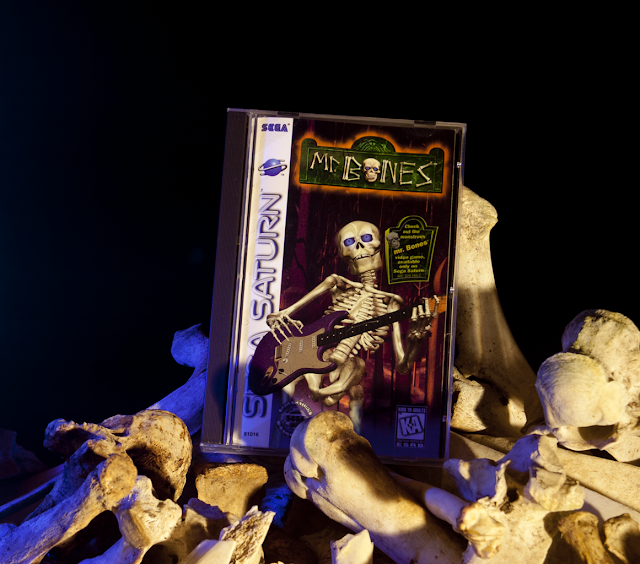 This game is WEIRD AS SHIT


If you haven't seen Zono Interactive's Mr. Bones you haven't seen one of the most fascinating, diverse and spoooooky experiences on the Sega Saturn. It is just so strange. The plot (told through numerous CG and FMV cutscenes) involves a certain blues-loving skeleton as he tries to escape the mad scientist DaGhoulian, a maniac who wants to "purify the world" by eliminating all conflict between good and evil by simply erasing everything that isn't evil. He will do this by playing a giant set of magical drums to animate the dead! 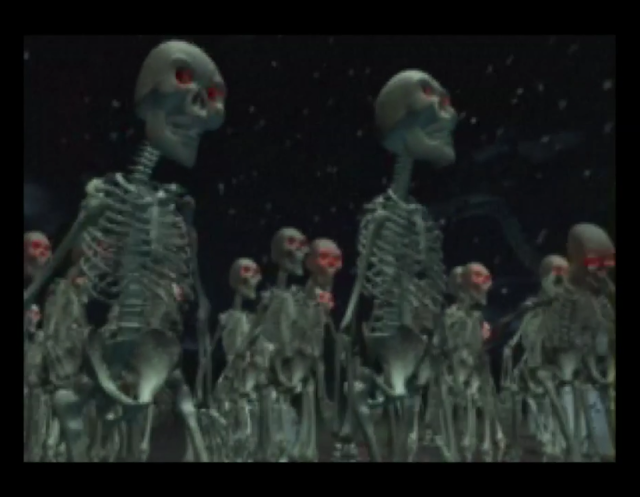 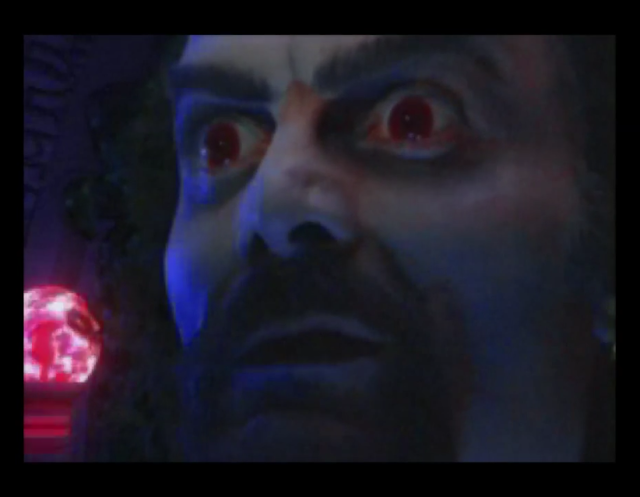 The most fascinating thing about this ol bag of bones is the variety of gameplay you deal with from stage to stage. Level one "Grave Escape" is an autoscrolling chase stage in which the player, controlling a sharply defined polygonal skeleton, must escape an army of pre-rendered skeletons through what is essentially an FMV movie of the stage (think the backgrounds in Space Channel 5). The result is a beautifully rendered stage, but overlaid with blurry, low res FMV skeleton characters chasing a high res player character--very eerie in its crappiness, but I imagine it was pretty impressive back in the day. 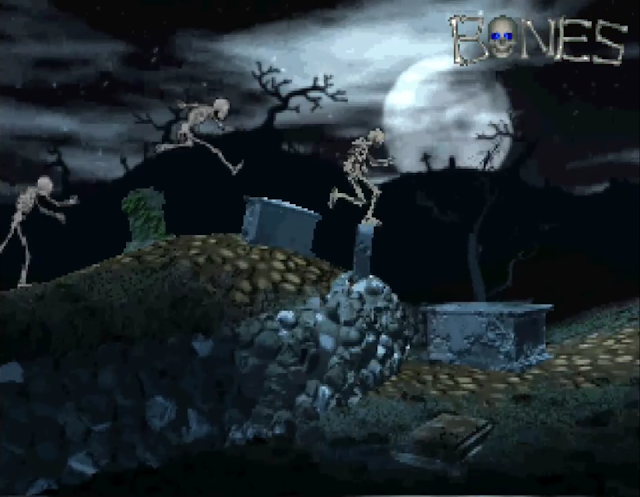 "The Mausoleum" is a continuation of the previous escape but now the action takes place on a two-screen-wide rooftop as enemies try to swat you off before charging you head on. The controls in this game feel quite awkward and the game suffers for it in my opinion, but stick with it. Unfortunately, losing your one life will boot you back to the title screen where you must use the level select menu to go back to where you were--a continue option would be nice here. 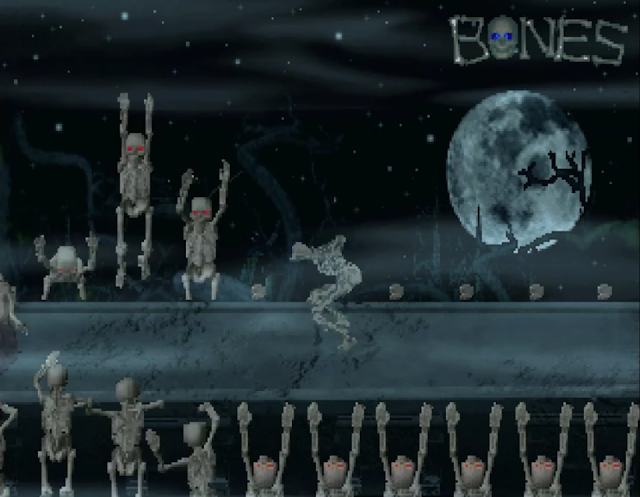 Stage 3 is a traditional "walk to the right" affair, and at this point you might think the game's early gimmicks are leveling out and it's going to become a normal game; then Mr. Bones comes upon a blind blues guitarist in a remote cabin and we experience what this game is probably best known for: 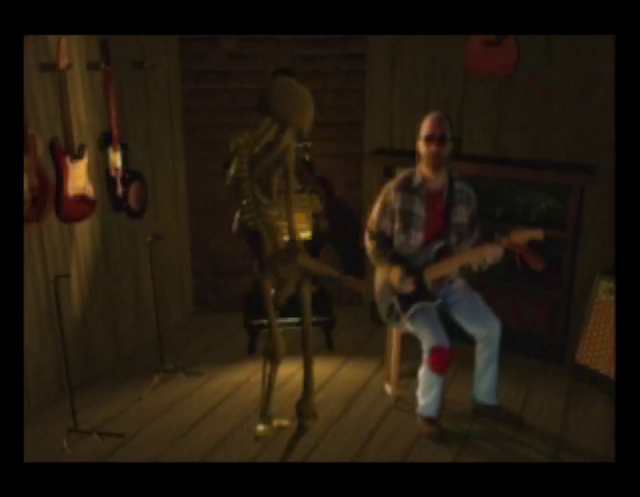 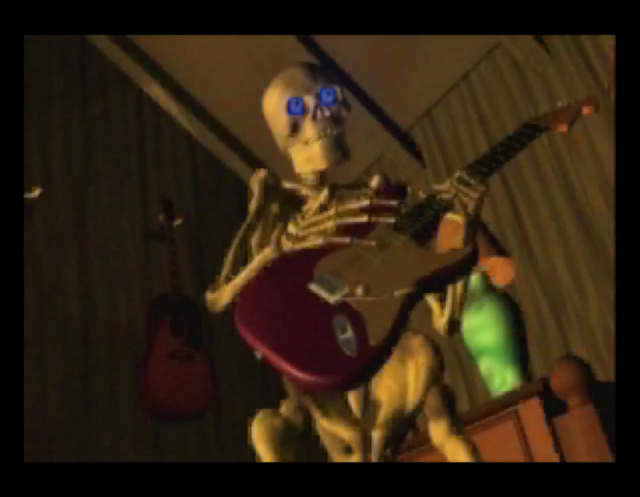 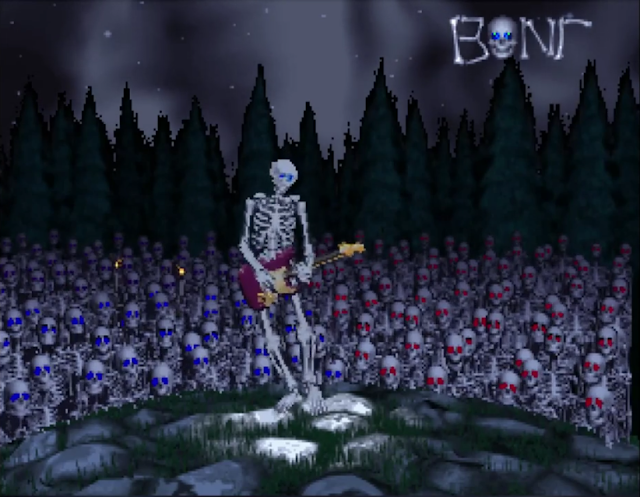 "Now ya'll can't talk but you can listen--and maybe even feel!"

Impromptu skeleton guitar solo! Now it's a music game in which Mr. Bones must use the D-pad and buttons to win over the skeleton army with his sick riffs. There are no instructions in this stage, you just have to feel it. I should point out at this point that the soundtrack is excellent, composed and performed in large part by rock and blues legend Ronnie Montrose. In addition to the kind of light horror music you would associate with a game about skeletons, the guitar in this game is absolutely legit.

Win over all the skeletons by playing well and you're on to a trio of stages that made me stop playing for a while: Night of the Bats, Dawn of the Bats and Day of the Bats. 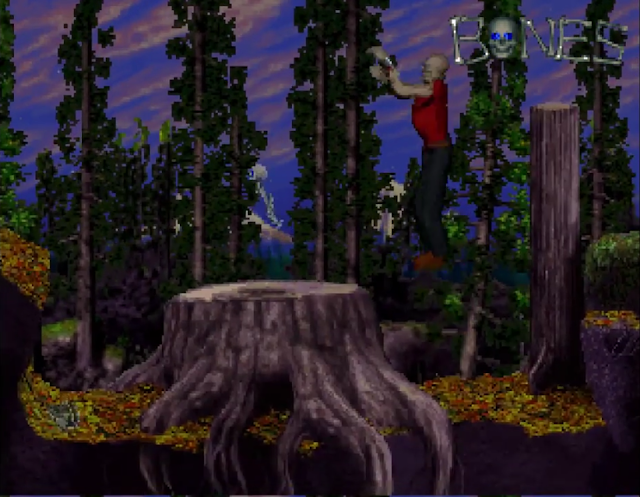 ...in which bats have taken all of your body parts aside from your skull and spine and you must retrieve enough bones to solve a simple puzzle at the end of the stage. Oh yeah, this is a thing that can happen by the way! Take a big enough impact from an enemy and a bone may fall off: lose your legs and you can't damage enemies from jumping. Lose your right arm and you can't attack with your skeleton laser (also there are skeleton lasers in this game). Once you're down to just a head you're in trouble so make sure you always pick up spare bones when you find them. These stages suck balls, they're very vertically oriented and precise jumping is very difficult. Get used to falling down onto Frankenstein monsters.

I haven't beaten the bat stages so I've yet to experience what comes next personally, but I did watch ahead a few stages on Youtube and I truly believe you must stick with it because the gameplay just keeps changing and getting stranger. Here's a shot of Mr. Bones navigating an alternate dimension of evil while a man in the soundtrack waxes philosophical about how even newborn babies have the blues--if you aren't planning on playing this game,  I strongly urge you to watch a playthrough. 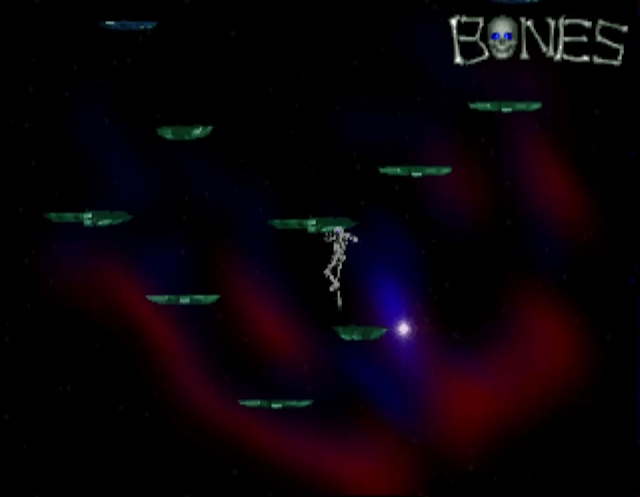 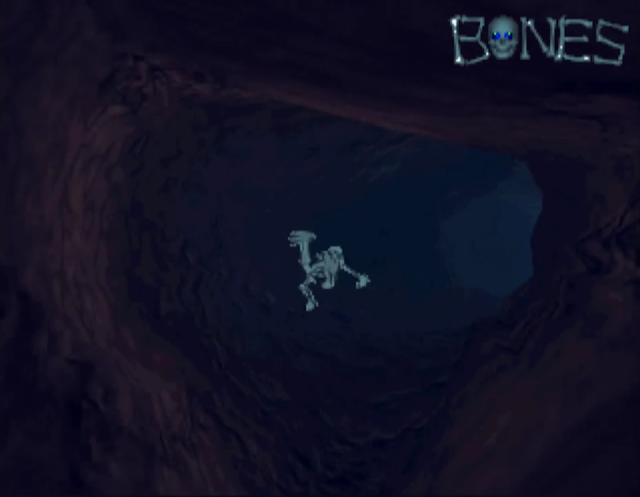 Mr. Bones really seems like a passion project made by skeleton loving madmen; I've never seen anything quite like it. This is a little late for my October Horror Games posts but it's got enough skeletons to stretch Halloween straight through November. If you've got a Saturn, get it! It currently fetches about $30 on the secondary market so it's a bit expensive for a used game, but such a great gem to have in any retro game/skeleton collection. 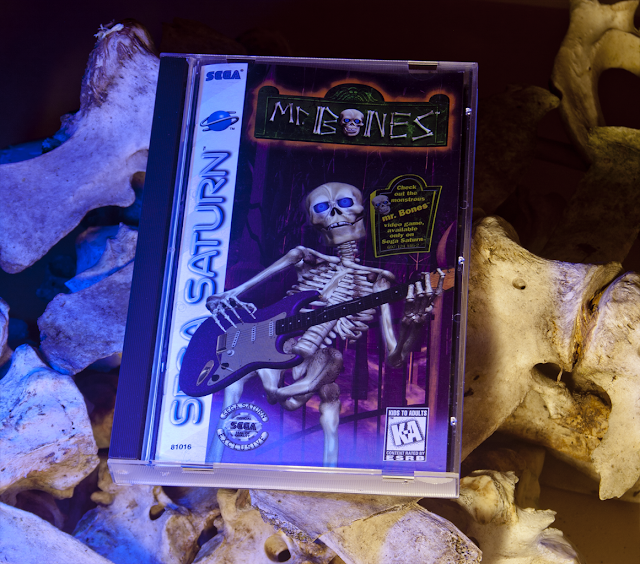