It's July 4th! In the United States it's Independence Day, a holiday that was ostensibly created for, you know...patriotic America type shit. Nobody actually cares, it's an acceptable reason to get drunk and set off fireworks! In the spirit of this most sacred holiday, I'd like you to take a look at the tech demo-turned-Playstation 2 launch title, Fantavision.

Intended to be a game that the entire family could enjoy, I assume Fantavision was localized to diversify the launch lineup for the Playstation 2 in 2000. However, the top ten best sellers for that year were headed by Madden 2001, Tekken Tag Tournament and SSX. It's a safe bet that western audiences had no clue what to think of Fantavision, and the fact that it appears to be little-remembered (outside of the few who bought it at launch and fell in love) seems to reflect that.

Fantavision's presentation is immediately striking; as a fireworks based puzzle game with no actual character-based hook, the introduction and packaging goes for an odd, somewhat Norman Rockwell-esque theme of a good old-fashioned American family getting together to play some PS2. I'm into the anachronistic, 50's style infomercial look, though some people have said the introduction and inter-stage cutscenes can be off-putting and creepy. And you know what: they're not wrong.


I think it's cute, in a supremely odd way. We need to talk about the greenscreen goofup that sheared half the face off that poor boy on the right, though. 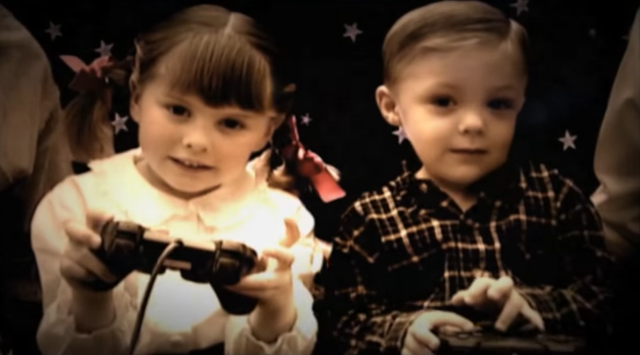 Think of it like a cross between a color matcher and Missile Command! Fantavision is easy to explain if you're familiar with color matching puzzlers in the vein of Dr. Mario, Tetris Attack, Candy Crush and the like. The camera pans slowly over a cityscape at night as fireworks of various colors are launched from the bottom of the screen. Drag your cursor over consecutive fireworks of the same color (at least three of em) and press the Circle button to detonate them in a beautiful, Turn of the Century display of particle effects. Let them hang in the air too long and they fizzle, draining your energy gauge. This is the ebb and flow of the game. 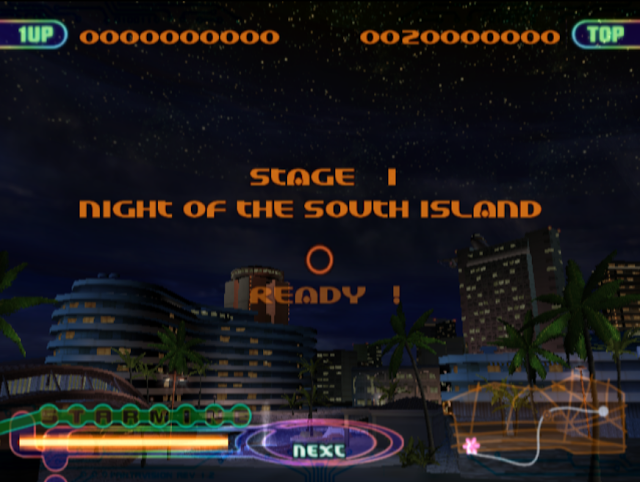 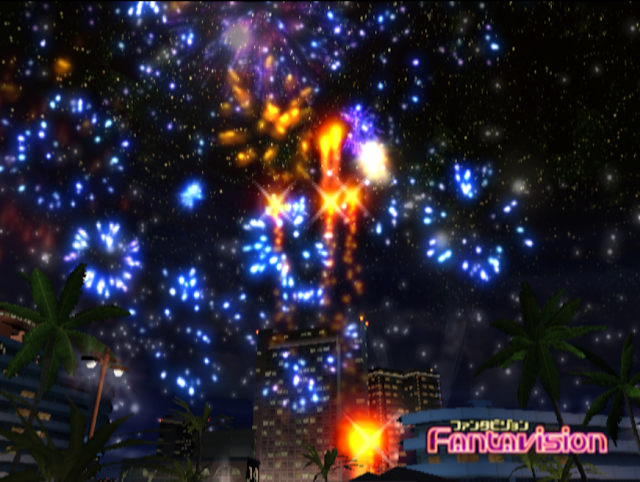 Once you've gotten the hang of chaining consecutive colors, notice how hitting any special fireworks that aren't tied to colors (such as the versatile Wildcards or one of several Items) allows you to start tagging differently colored fireworks! This is where the "Daisy Chain" system comes in. For example:

-Tag four blue fireworks
-Tag a Wildcard firework--now you have a Five Chain, or...
-You can now tag two or more of a different color firework and voila: a 2-Daisy.

2-Daisies are just the start of course, and expert players can plan ahead to get multiple combos in one detonation. Doing this before your fireworks start to fizzle out is another thing entirely, though!

Fantavision begins in a festive nighttime city, but as you progress through the game the player enters Earth orbit (yes, there are fireworks there), a moon base, and finally to a Dimension Beyond Space where the fireworks emerge from all sides of the screen. I'm never making it that far into the game though, because Fantavision is hellaciously difficult and has yet to really "click" with me from a gameplay perspective.

Fantavision was originally created as a tech demo to show how well the Playstation 2 could handle particle effects (perhaps to show off its higher video RAM compared to PS1; correct me if I'm mistaken). Somewhere down the line they realized that a real ass game could be squeezed out of the idea, and Fantavision was released to...polite reviews. Consensus seems to be that it was an average but unremarkable puzzle game, a little thin on content but with nice graphics. Unfortunately I can't find any sales numbers, but according to Youtube comment sections it's remembered fondly!

Regional Differences - A Soundtrack For Everybody! 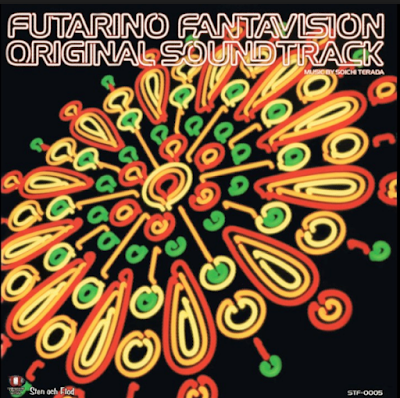 Here's an interesting oddity about the game: the NTSC-J, NTSC-U and PAL releases of Fantavision all have entirely different soundtracks.

The Japan version was composed by Soichi Terada, an electronic musician known for composing for Ape Escape and co-founding the musical group Omodaka (!!) while the North American soundtrack was scored by Ashif Hakik, a composer whose credits list is short but includes Sly Cooper and Tomba 2. Both versions have their own bright spots, with a mix of funky techno and more atmospheric, new-age sounding tracks. The PAL version, by contrast, is the work of composer Jim Croft and is decidedly more European in its dance club feel. Of the three I prefer the Japanese version best, though all of them are decent.

One very odd thing is the PAL version's intro music; rather than the appropriately goofy muzak style of the Japan and NA release it goes for a techno tune that is strangely dark and unfitting against the visuals. Super weird!

Also of note are the announcers. The Japan and Europe releases feature separate female VAs calling out the onscreen action while the North American version uses a slightly bored sounding male announcer. It's a tossup between the PAL and JP announcers for me.


Skip to 0:15 to hear the European intro music.


And here are the three soundtracks for Fantavision if you'd like to compare them yourself! They're all quite different.

I haven't played it myself, but it's said that the real fun of Fantavision is in its 2-player Versus Mode. Players compete to get the highest explosion combos while a variety of items also fly onto the screen to give yourself an advantage (or mess with your opponent). The western releases of the game got this mode out of the box; it wasn't until the Japanese rerelease titled Futari no Fantavision ("Fantavision For You And Me" or more literally "Two-Person Fantavision") that Japan could play 2-player as well.

So that's Fantavision! Should you play it? I don't know, maybe. The steep learning curve, idiosyncratic soundtrack(s) and bizarre cutscenes seem as if they would be off-putting to the wide audience that Fantavision aimed to please. Now that I'm older and weirder I find it a very interesting piece of art that you don't see so often in mainstream games.

You won't find anything earth-shattering with Fantavision, but it's an neat little game with great music and an odd presentation style that makes it stand out from the crowd. Get the lovely HD version of it on PS4 if you want to go that way!

I'm also a sucker for anything with fireworks, though...
Posted by Ribbon Black at 9:46 PM
Email ThisBlogThis!Share to TwitterShare to FacebookShare to Pinterest
tagged with: fantavision, playstation, ps2, puzzle
Newer Posts Older Posts Home
Subscribe to: Posts (Atom)