Gradius for NES. This game has haunted me for most of my life. It was the first SNES game I owned (and it still works just fine!) and when Gradius V came out on PS2 I tried, I really tried to beat that bastard. Once it gets to the point that I'm truly screwed if I lose a life (all powerups you gain are lost upon death, making you nearly defenseless late in the game) I have to concede defeat. Now let's take a look at the arcade and NES versions of the original Gradius and make fun of it.

Or maybe not! Your ship can only have two Options (multiples) instead of the usual four and vertical scrolling was eliminated, but graphically it's quite faithful to the arcade original. Let's have a look at the damage. 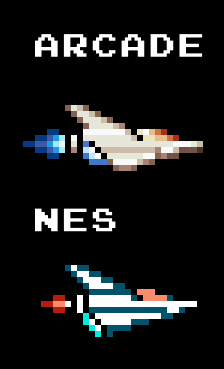 The Vic Viper (AKA "Warp Rattler" if you're reading the US instruction manual) didn't suffer too much--the size of the ship is the same though the propulsion in the back shrunk down a bit. They even gave it 5 colors instead of the usual three through the use of multiple sprites. 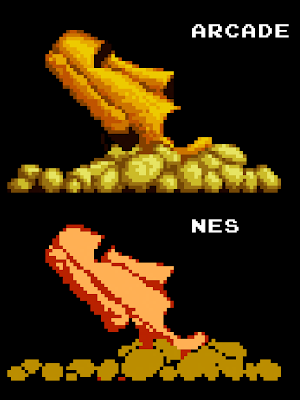 The "EASTER ISLAND GUYS" as I always called them didn't lose any size either, though the color limits made them take a hard hit in definition. I think putting some highlights on the rock clusters using the main body color of the Moai might've helped a lot.

Now we're talking: the Big Core enemy isn't quite so big in the NES version! However, it's nice and colorful thanks to the aforementioned multiple sprites. Overall a good effort.

I was going to take Konami to task for this on account of the romhack that improves the graphics such that they rival the arcade version, thinking that surely they could have done this themselves back in the day. However, the hack expands the rom well past its original size and uses some Assembly hacks to increase the Option number back to four, so I'll assume that given the hardware they had to work with Konami did the best they could.
Posted by Ribbon Black at 1:46 AM
Email ThisBlogThis!Share to TwitterShare to FacebookShare to Pinterest
tagged with: arcade, downgraded, famicom, gradius, i love video games, NES, pixel
Newer Post Older Post Home