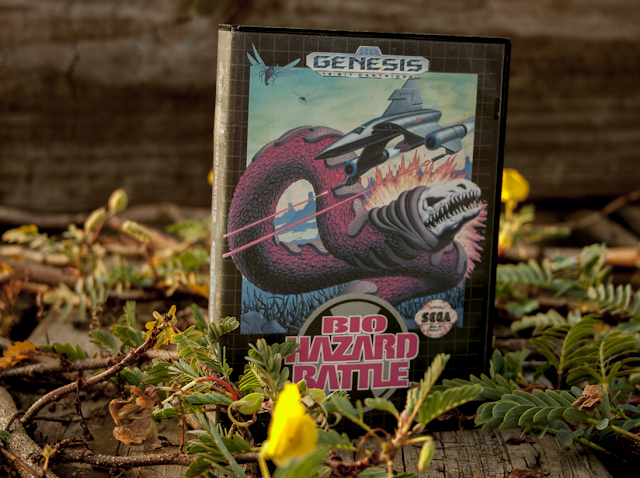 "Who can say that a similar crisis will never occur again?"

Biohazard Battle...is it a stretch to call this one horror? I'll allow it. The bio-mechanical designs are reminiscent of R-Type and the music definitely fits the bill:

The story is appropriately dark as well. The "First Global Bio-War" ends up being the last, as one side unleashes a powerful retrovirus that devastates the globe, rendering it uninhabitable. The remainders of humanity retreat to an orbiting space station to be placed in cryo-sleep until the world becomes livable again. Also in suspended animation are four living weapons used in the Bio-War, organic aircraft with the ability to change their genetic structure depending on powerups they collect. 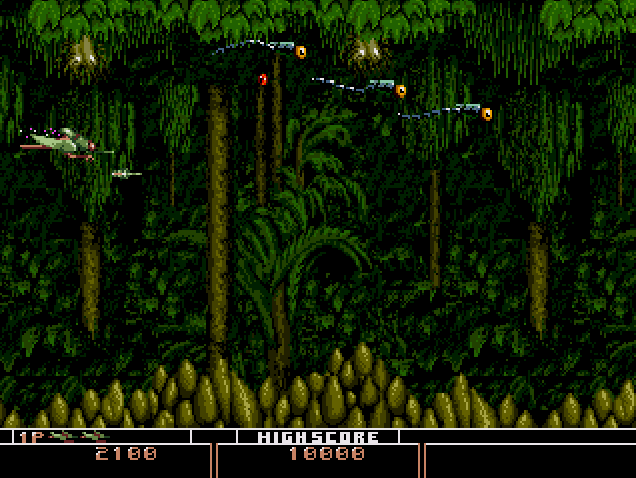 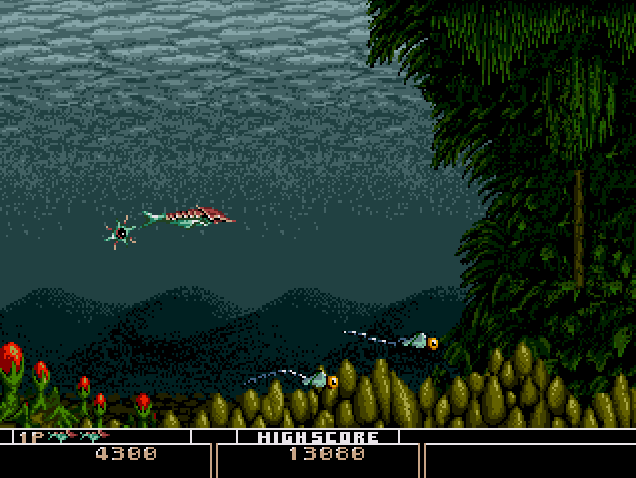 Centuries pass, and the station's computers awaken the biowarriors when the atmosphere is deemed livable enough for humans. The only problem now are the creatures infesting every inch of the planet ¯\_(ツ)_/¯ 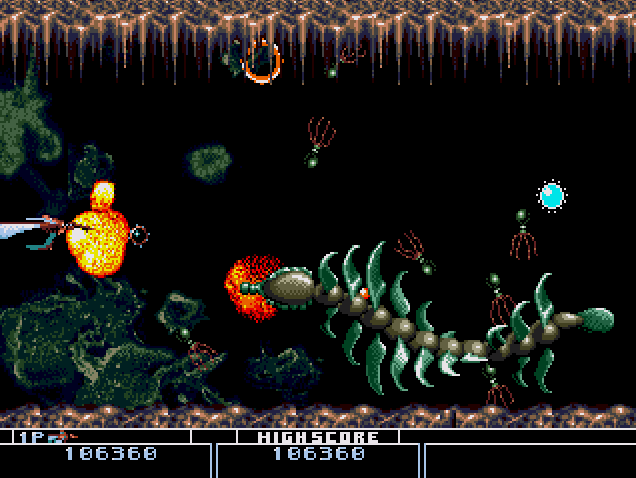 This game is cruelly difficult. Some fresh hell is crawling around every corner and it's not particularly interested whether you're powered up enough to deal with it. The graphics are dark and full of detail; they particularly shine in the dense forested levels, though thematically speaking I really liked the stages showing the crumbling ruins of human society, teeming with gross weirdos. The odd, muted soundtrack is excellent at evoking a sense of dread, particularly the boss theme. 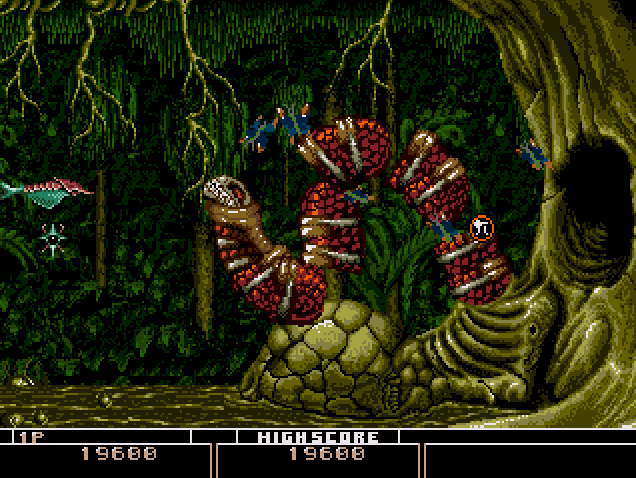 Up there's the Stage 3 boss (who apparently made an impression on the designer of the Genesis cover art), a skull-headed snake creature that emerges from what appears to be the dessicated remains of a gigantic humanoid figure. I'm not sure what exactly it's supposed to be but the story implications are pretty upsetting. 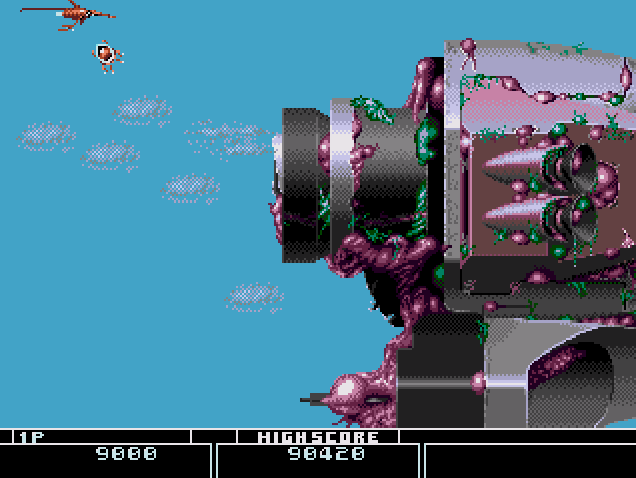 Near the end you find a mothership (either the same ship or similar to the one that dropped you off in the first stage) that has become infected by the biomonsters and must be dealt with. Bummer. Are they sure this planet is ready for prime time? 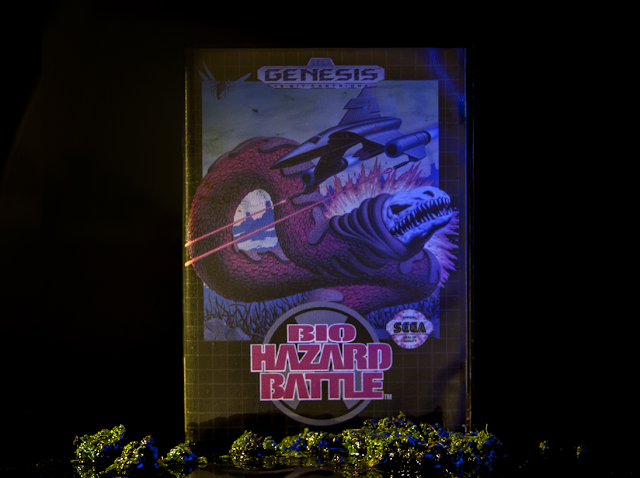 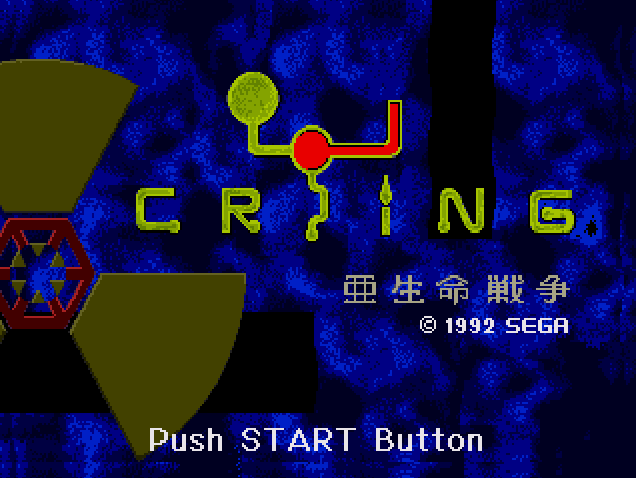 The Japanese version of Bio-Hazard Battle is known as Crying: Biological War. Odd as the title is, I like how it suggests the eco-horror tragedy of people making their own world inhospitable towards them. What's really inhospitable is how Crying doesn't have autofire--because of this I assume the Japanese version is just fucking impossible. Bio-Hazard Battle had autofire added in and it's still too damn hard. 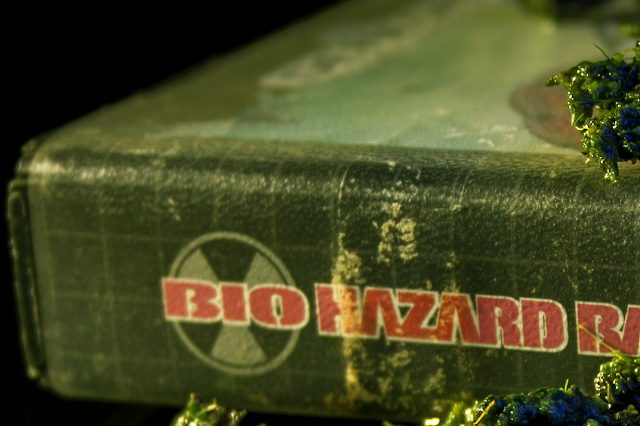 Is it good? The game is fairly affordable online, but I'd only give it a light recommend; the atmosphere created by the graphics, the dark, bass-heavy soundtrack, and the bleak backstory is great. On the other hand the gameplay is a little underwhelming and overly difficult while lacking that intangible "It Factor" you get with some shooters. Most of the problem lies in the difficulty of positioning the player's Gradius-style option when enemies attack from behind.

I'd say emulate it first, and if it's your thing, then Bio-Hazard Battle is an attractive part of any Genesis/Megadrive collection.
Posted by Ribbon Black at 9:27 PM
Email ThisBlogThis!Share to TwitterShare to FacebookShare to Pinterest
tagged with: biohazard battle, halloween, horror, sega, sega genesis
Newer Post Older Post Home