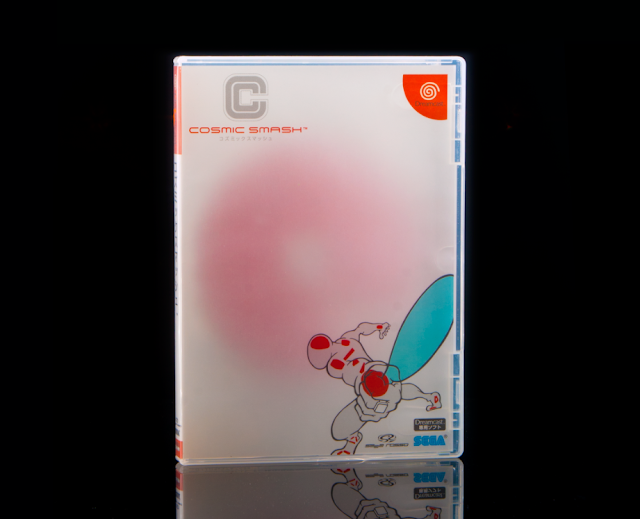 I can only think of a small handful of games that set out with a dead simple purpose and execute it to perfection. Cosmic Smash is one of those games: a single laser-focused idea--What If Rez Was A Sports Game Instead Of A Shooter--polished to a diamond shine that would make any Sega fan proud to have it in their collection.

Who's Sega Rosso? A small internal team at Sega known mostly for their racing games. Before long they were absorbed into another internal developer called Hitmaker, where they continued making badass Dreamcast and arcade games. 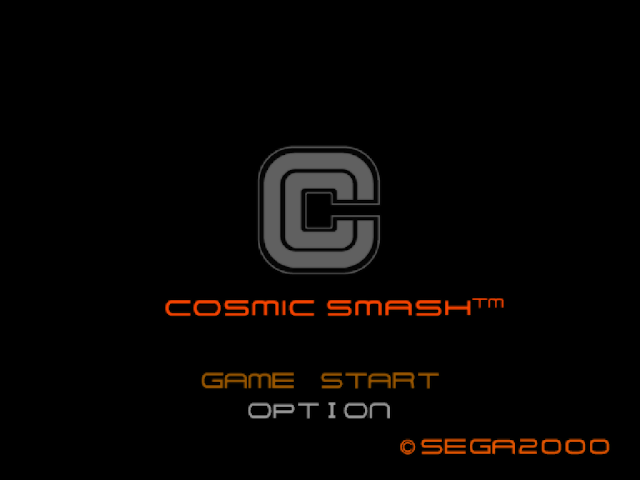 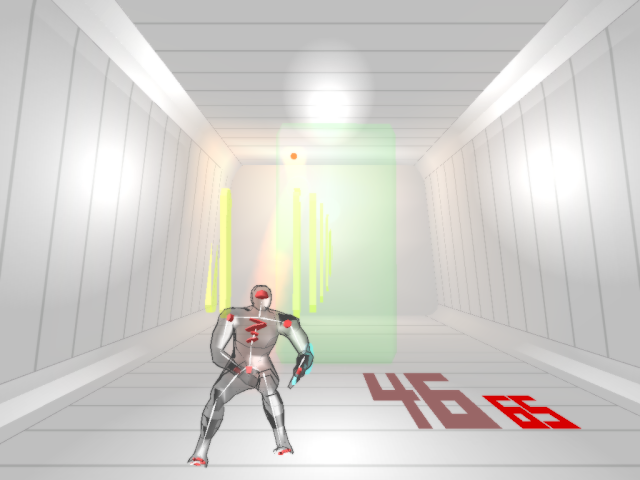 If the 1980's was Sega's "Blue Skies" era, defined by such games as Outrun, Fantasy Zone and Afterburner, I think the Naomi/Dreamcast era of the early 2000s will be remembered as their "SUPER CLEAN FUTURE" era (somebody please give me a cooler sounding name than that). This might be a personal view but outside of Sonic and fighting games, Sega in the Dreamcast era means Space Channel 5, Rez, Chu Chu Rocket and of course Cosmic Smash.
These four superb games all took place in a world presumably a long way from ours, far from the present time. The presentation is particularly striking in all of them, featuring clean lines and large swaths of featureless white and black that pop with bright, punchy colors. They tend to range from fantasy/comedy (Chu Chu Rocket) to narrative-driven games with varying tone (the retro-futuristic mood of Space Channel 5 couldn't be more different than the dark cyber fairytale/creation story of Rez).

On the other hand our boy Cosmic Smash is unique as a tight, straightforward and impersonal arcade action game almost entirely removed from any narrative--quite a bit different than most arcade games that lean hard on character-driven presentation. Let's check it out! 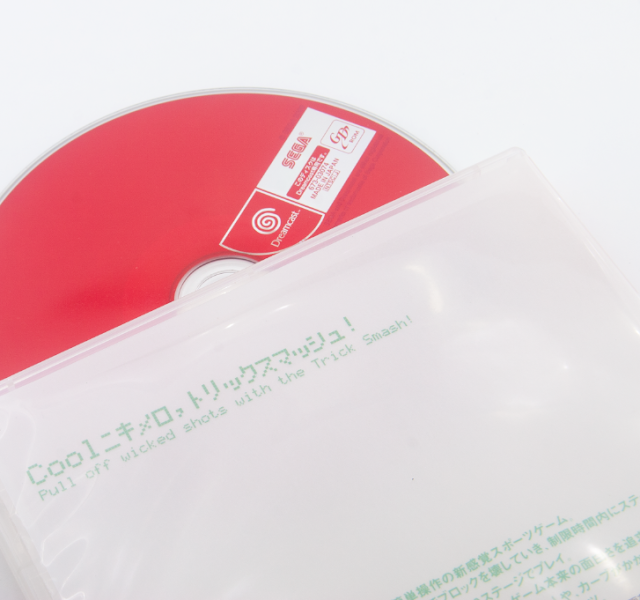 Calling it "Rez but Sports" is actually totally inaccurate outside of the look of the thing; it's more like the real world game of Squash (tennis, but your opponent is a wall) mixed with Breakout or Taito's Arkanoid (destroying all blocks to continue).

Your character/robot/artificial intelligence/whatever finds itself in a series of blank, futuristic rooms with a ball, a paddle and an increasingly complex pattern of translucent bricks to pop any way you can. I say "any way you can", but there are only two ways to do it: regular shots and Trick Smashes. Carefully aiming by tapping the joystick in the desired direction as the character winds up its shot lets you bounce the ball wherever you want once you get the hang of it, and aiming one way then quickly doubling back puts a satisfying curve on your shot that is vital for getting around unblockable obstacle blocks later.

Simple as the game is, Trick Smashes are where the game really opens up in terms of variety. To perform a Trick Smash, press the Y button and a direction. The character will start flashing red and yellow as the ball flies straight toward them. Depending on which direction you held when you pressed Y, you'll do one of a variety of cool and sometimes gravity-defying trick shots that will blow through multiple blocks without bouncing back until the ball strikes a wall.

Powering up a Trick Smash also quickly eats through your time though, so use them only when you're sure to blast a bunch of blocks simultaneously (and to finish the last block off whenever possible...Trick Finishes are where the bulk of your score comes from once you start getting serious!).

For years I thought there were about 6 Trick Smashes. Somehow, THERE ARE 28 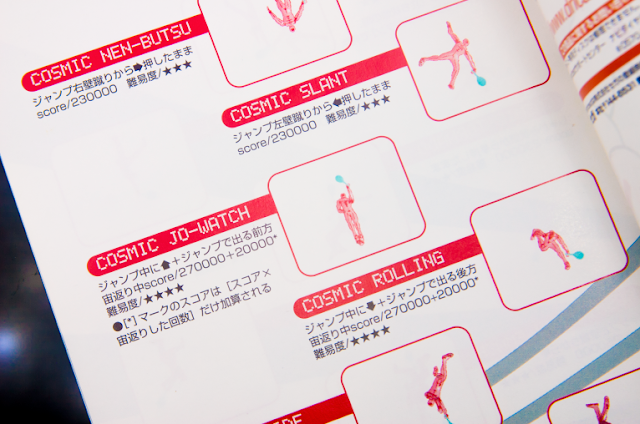 I don't even understand how to do some of these, but a big part of it is whether you're on the ground, in the air, or somersaulting off of the wall when you execute the shot. On the one hand it's awesome do do a stylish finish, but on the other hand there are only a couple that will award the maximum 300,000 bonus points so why not only do those? A video of a player showboating would be great though, because I still haven't seen most of these moves.


Let's look at the packaging some more. Unlike...every other Dreamcast game (?) Cosmic Smash came in a transparent DVD sized case.  Interestingly, the case insert isn't the opaque paper stock you see in every other game--note the visible disc. The insert was printed on translucent white vellum, and that's fucking awesome. Way to be, Cosmic Smash! 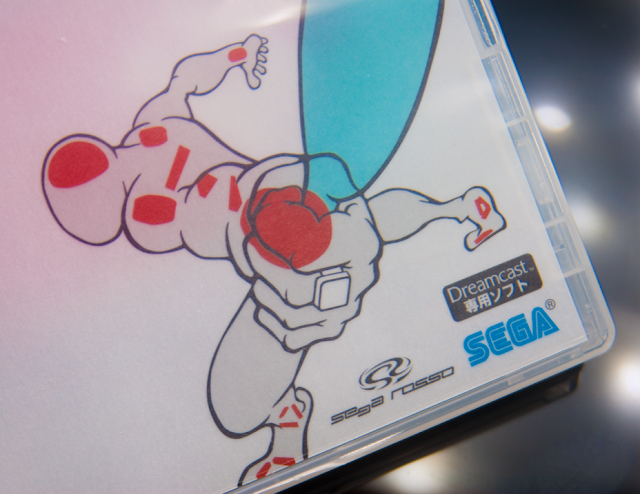 So what's the story in this game? You're not liable to get much from just playing it, even though all voice work is presented in English by a strange, monotone narrator (mostly relegated to announcing the name of the stage you're entering and instructing you to "have a blast"). The modular series of neon-lit rooms are laid out on a map similar to a rail line, with each stage designated a name and number. 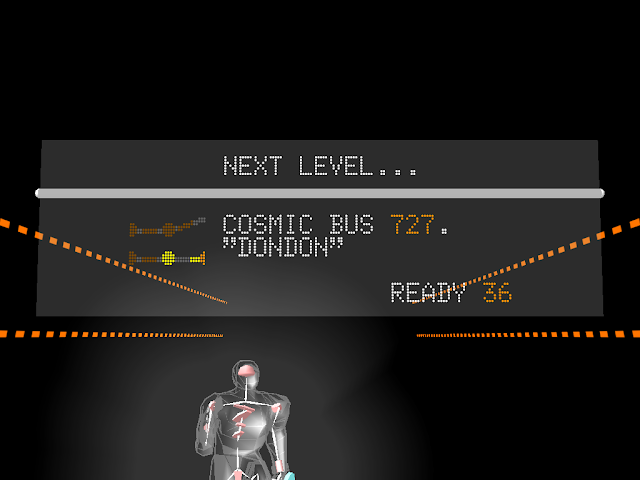 Not many clues from the main character either...your avatar is definitely human male shaped but also obviously not human. On the other hand, after exerting itself it breathes laboriously, which is strange for a wireframe computer boy. Doubling back when running across the stage makes the sound of tennis shoes squeaking on a hardwood floor too. He's even wearing a ring on the boxart! The juxtaposition of relatable sounds and visual cues against a sterile, alien setting is a definite stylistic choice, but who knows if they were going for something other than stylishness. Honestly I'm not too caught up in the Deepest Lore of Cosmic Smash, but it's interesting to point out the incongruity of its presentation (and I'm trying to write longer blog posts). 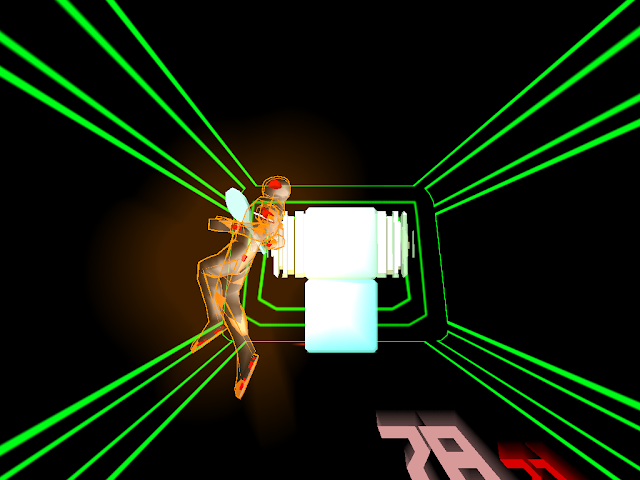 One last thing to mention: the internet ranking! Like some other Sega games, you'll be given a password and website to enter your results into a worldwide scoreboard. The site is gone now of course, so you'll just have to take my 80000000000 score for granted. 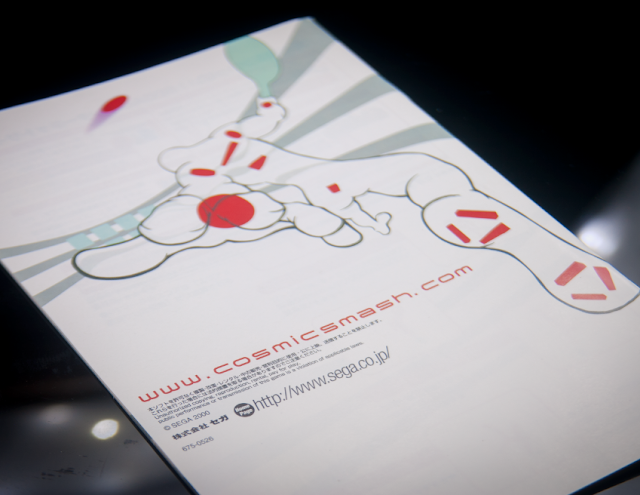 I'm far from the first person to wax poetic about Cosmic Smash, and if you're a regular reader you probably already knew about the game--for a much more eloquent take about the game have a look at Brian Crimmins' article on HardcoreGaming101. I had to use the "Weird Sports Games" series as an excuse to talk about the jewel of my Dreamcast collection, though! Also, I made it through this whole post without using the word minimalist! I should get a trophy.

The game is expensive now; around 70 USD on ebay last time I checked. If you can't get a physical copy, at least give it a few plays on emulator. When the gameplay clicks, trying to reach the end of the many multiple routes is addictive!
Posted by Ribbon Black at 8:32 PM
Email ThisBlogThis!Share to TwitterShare to FacebookShare to Pinterest
tagged with: cosmic smash, dreamcast, hidden gem, sega, sega rosso, sports, weird
Newer Post Older Post Home