I owe a lot of my problems to Schoolhouse Video, my local video store. The front counter had Pogs and comics, the shelves were lined with 8 and 16-bit games that I rented over and over, and in the back room -- the horror section. Many of these movies I saw way, way too young -- and a few had such upsetting VHS box cover art that they gave me nightmares even without seeing the feature presentation. A couple of these come to mind...The Evil Dead 2, with its starkly lit, weathered skull peering out with human eyes. Ghoulies, a box that asks the question: what if a goblin was in your toilet.

Even though I was basically in a state of constant terror from my unshakable conviction that Freddy Krueger was hiding under my bed and Charles "Chucky" Lee Ray was just waiting for me to open the closet door, I miss that overactive imagination I had. Even things that weren't supposed to be scary would give me the mild creeps -- to pick a totally random example, NES games. The blank, black scenery in Super Mario Bros' underground stages were downright eerie to me.

Metroid too. Screenshots from here and here.

Though it was of course a result of the limitations of mid-80's NES development, this bit of visual shorthand came across to me as mystifying and somewhat sinister--what's going on back there that the player can't see?

Maybe that sounds like a bit much, or maybe you felt something similar when you played these games. I'll be the first to tell you that I let the most innocuous things get to me as a child, but at least I wasn't alone in having the shit scared out of me by Friday the 13th's maze like cabin areas and Punch-Out style Jason attacks.

I'm digressing too much. What I wanted to talk about today was the game in the photo...when I was around ten years old I found myself alone in the room with a game I just couldn't stand to look at. I took a kitchen knife and scraped the label off!


Look familiar? If you're really up on your NES packaging you can probably guess what was so god damn scary I had to destroy a game that now (as of this writing) sells for upwards of $60+ on eBay:

...I know, pretty spooky. Looking back on this now I have no idea; she's wearing a beautiful dress and carrying a parasol. Maybe if she didn't have those Judge Doom-esque eyes it would be a little less silly, but most likely this label got to me because I had in-game context for the image that truly traumatized me: 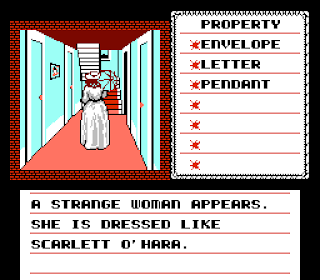 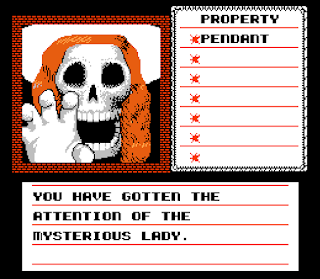 I swear to you this was terrifying in 1991! Even when I knew how to beat the skeleton I was reluctant to play this part for fear that I'd slip up and use the wrong item somehow, triggering the boneface and scary music.

Considering how I was too scared to look at the box art for Evil Dead 2, I think my biggest fear might just be skeletons with eyes. So that's the story of how I couldn't handle the label art for Uninvited. Maybe I should have saved this tale of terror for my Halloween posts?