*warning: this is the nerdiest thing I've ever written on this blog*


...And if you're a Ridge Racer fan, that name sounds very familiar:


Namco's other well known Nagase, Reiko, is the face of one of their most famous non-Pacman franchises. A once respected Elder Statesman in the arcade racing genre, Ridge Racer's star has faded since its introduction in 1994. For children of the late 80's/90's, however, it shares a spot with Sega's Daytona USA as an example of an all but lost racing ideal: blue skies, loud music, unrealistic physics and pure arcade driving action. In the meantime it's up to independent developers to fill the void these games once occupied, but we're getting off topic.

I want to go over the evidence that suggests that the Ridge Racer and Ace Combat series exist in the same timeline, while also giving a short primer on the two characters that the theory revolves around.

Strangereal ("Strange Real", a strange or different version of the real world) is the internal name for the universe in which most Ace Combat games take place. It sounds clunky and was only intended for developer use to refer to the game's setting (only one Ace Combat game, the 2011 mobile title Northern Wars, references Strangereal in-game) but the term stuck for fans of the series. Officially, the setting of Ace Combat is simply called "Earth".

As you can see, the Strangereal version of Earth shares a couple things with real-ass Earth, namely Antarctica as well as the Arctic and Pacific Oceans. The rest are fictionalized analogues to real world locations. In the words of Kazutoki Kono (head of Project Aces) this creates an "accommodating world" that allows the developer to  play with realistic themes and settings while throwing in unrealistic technology (not to mention avoiding the baggage that comes with using real countries).

This brings us to the Ridge Racer connection, and this is where it gets a little weird. But first, a few words about Reiko Nagase. 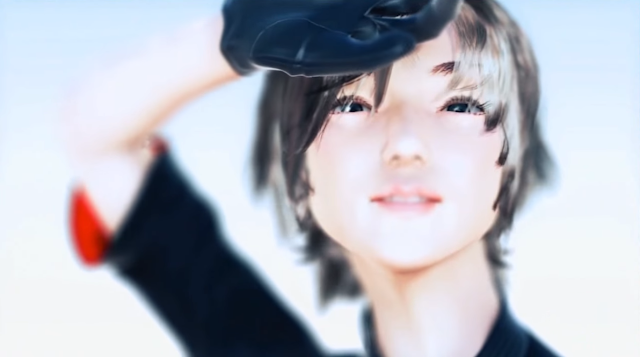 Though her in-game presence is limited, for my money Reiko shares the spotlight with Pacman as an iconic Namco character. First appearing as an anonymous Race Queen in Rave Racer but not officially named until Rage Racer (yes, they're both Ridge games), Reiko grew in popularity until she became a sort of mascot to the franchise.

The point where Reiko became a Big Deal was undoubtedly the introductory cutscene to Ridge Racer Type 4. Though some of it may be a little wonky today, this was truly impressive at the time! Classy, sexy, and able to introduce the players to R4 in a way that didn't feel like a video game cutscene -- no one had seen an intro movie like this before.

All of this was accompanied by a brilliant dance tune with jazzy vocals by Kimara Lovelace, setting the stage for the best soundtrack in any Ridge Racer game (don't @ me). Bless your speakers by watching it below.

So popular was Reiko that there was actual fan outcry when she was briefly replaced by another mascot in the Playstation 2 launch title Ridge Racer V; she remains a prominent presence in the franchise, such as it remains in 2018. In later games she even acts as an opponent driver and official spokesperson for the UFRA (the United Federation of Ridge Racing Association, thank you for asking). 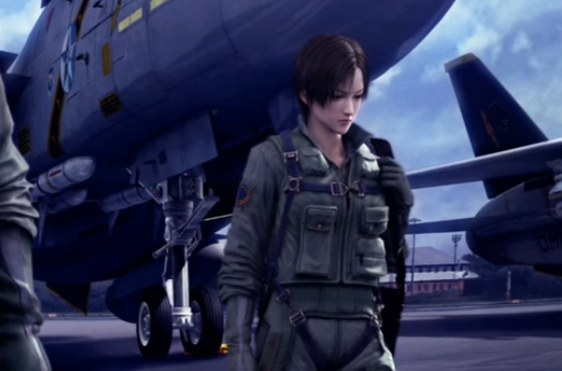 With all this in mind we come to the 1997 Playstation release Ace Combat 2, and the thought that your wingman would have the same last name as another very prominent Namco character is too much of a coincidence, right?

Kei herself is not only one character, however. Much like Link, unrelated versions of her with different backstories show up in a number of Ace Combat games. The interesting thing is that many websites (likely all cribbing from Wikipedia) claim that the version of Kei from AC2 was "officially" (see below) identified as Reiko's younger sister. Her birth year of 1977 would put her at 22, two years younger than Reiko. That's pretty cool! Case closed, right?

Another interesting point are the references to Ace Combat within the Ridge Racer universe. Ridge Racer 7 includes a gear manufacturer named Arkbird, which AC5 fans will recognize as the low orbit spacecraft of the same name that plays a large role in the story.

Even more interesting is this car from Ridge Racer 6 with "Erusea" branding, referencing the Kingdom of Erusea, a prominent country in the Ace Combat universe that served as the main antagonist in Ace Combat 4 - Shattered Skies. 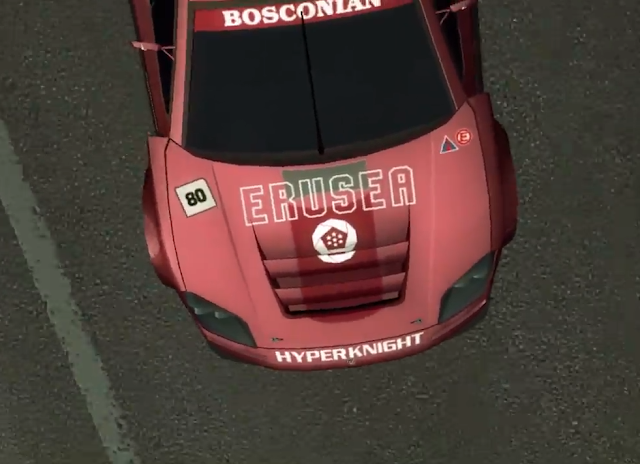 WHY THERE MAY BE NO CONNECTION AFTER ALL

This brings me to what a lot of people are already thinking: "you dumbass idiot, Namco does this kind of thing in tons of games!" You're not wrong, hypothetical fun-hater. A big hole in this theory is the fact that as enticing as these references are, Namco does this ALL. THE. TIME. Now we get to the contradictory information that suggests the Ridge Racer and Ace Combat connections are simply non-canon easter eggs.

Forget Nintendo; Namco is known for relentlessly referencing its own IPs in games where they don't belong, and Ridge Racer might be their biggest culprit of all. Here's a fun selection of Namco references! This is an incredibly incomplete list. 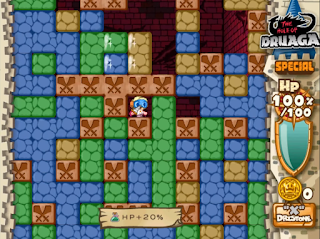 -Mr. Driller Drill Land:  One of the minigames is called The Hole of Druaga, an RPG-themed mode inspired by The Tower of Druaga. 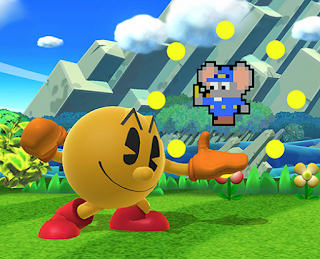 -Super Smash Bros For Wii U: Pacman's taunt will call forth a pixelated image of any number of classic Namco games. 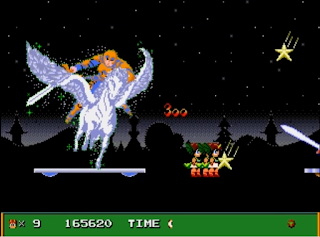 -Marvel Land: References to Phelios (!!) and many other Namco games during bonus rounds. 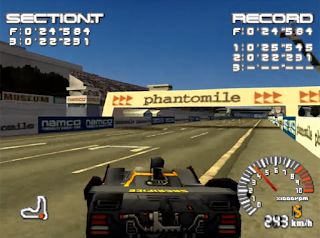 -And of course Ridge Racer, with course signs and cars that sport liveries referencing tons of other properties. Here's a course called Phantomile, referring to the 1997 PS1 title Klonoa: Door To Phantomile.


Ridge State is Namco's effort to flesh out the world of Ridge Racer more and add context to all that driving. Introduced in the series' 6th installment on Xbox 360, Ridge State is an archipelago that includes multiple seaside courses and Rave City (sick reference to the arcade only Rave Racer). While reading a wiki page on the subject, I was pleased to find a map of Ridge State, which led to perhaps the dorkiest thing I've ever done; scouring the old Strangereal map to see if Namco had actually geographically placed it in the Ace Combat universe.

Unfortunately the results were inconclusive. I checked over the entire map (focusing around the equator where R6's many beach tracks suggest it would be located) and couldn't match it up at all. Maybe someone with a sharper eye could? Here is a link to a much larger version of the Strangereal map.

The last two points I'd say are pretty inconclusive; just because Namco likes putting references to their own games everywhere, that doesn't mean there's no connection. Likewise, the map of Strangereal was created for Ace Combat 5, presumably by a different team than that of Ridge Racer 6. Perhaps it just wasn't important for them to make sure it matched a map used by a completely different genre of game? ¯\_(ツ)_/¯

This is both smoking gun for the two games' connection, and the big strike against the whole theory for me. The Ace Combat and Ridge Racer wikis both state this (as well as Wikipedia), but they only provide one source for their claim: an Ace Combat 2 preview from the August 1997 issue of Computer And Video Games magazine:

Unfortunately, Computer And Video Games seems to base this solely on Kei's name and birth date of March 1977, placing her near Reiko's age. Did they get this information from the developer of Ace Combat 2? Is this an official confirmation though? Without a primary source (Namco themselves) explicitly saying that the two are related, it's my opinion that this may be a case of Namco doing Namco and endlessly referencing and parodying its own properties within other games.

SO! Let's look at the evidence against. The fact that there are multiple Ace Combat characters named Kei Nagase, coupled with a lack of a reliable primary source for her relationship to the Ridge Racer character and the developer's particular love for self-referential easter eggs) poke some holes in the admittedly funny theory that Ridge Racer is about people holding gran prix in a war-torn alternate Earth. This doesn't even touch on the fact that Ridge Racer Type 4 explicitly refers to each racing team as belonging to specific, non-Strangereal countries.

Did I write all this bullshit out only for the truth to be that Namco is just having some fun? Maybe. I'm a huge fan of classic Namco though, so it's an interesting thing to think about. Until someone who is equally interested in this and can read Japanese tracks down an old interview confirming Kei and Reiko's relationship, who knows?

I'd love to be wrong! Let me know if you've got some more info on this completely pointless mystery.
Posted by Ribbon Black at 11:40 AM
Email ThisBlogThis!Share to TwitterShare to FacebookShare to Pinterest
tagged with: ace combat, i love video games, namco, ridge racer, strangereal
Newer Post Older Post Home